This is Part 1 of a two part series on the production of 2018 Series 2 Garbage Pail Kids Oh the Horror-ible. Part 2 will be posting soon. 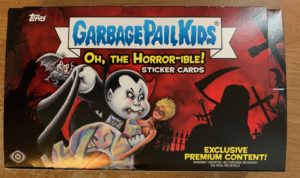 Topps got off the a fast start in 2018 with the first retail set We Hate the 80’s. Collectors enjoyed the gags that harkened back to their youth when GPKs first came out in the 80’s. However, once 2018S2 Oh the Horror-ible was announced, collectors almost unanimously were excited to see what Topps could produce. The Horror genre resonates with GPK collectors perhaps more than any other. So would that love for Horror reflect on the production numbers? News on production took a hit shortly after the set was announced and Topps cancelled Gravity Feeds packs due to Target’s lack of interest in ordering. As you will see both the Horror theme and the cancellation of Gravity packs had a large impact on production this year. Lets crunch some numbers!

To start we need to determine how many packs were made for the entire print run. In order to do that we need a card type where all the odds are exactly the same in Collector and Retail/Hobby packs. In the past this was easy. Historically, Topps has used the same exact odds for both the Gold borders and the Artist autographs. For the most part that stays the same this set, with one exception. For the second set in a row, Topps changed up the Fat Pack Retail pack odds. Usually they are 1/2 of all the other packs, because there is double the amount of cards. So in the past we counted Fat Packs as two packs. Now as you will see below the numbers are slightly off. The only way to possibly take a stab at this is to assume the Fat Pack odds are 1/2 a regular pack. Just keep in mind the odds are slightly easier for the Fat Pack Retail packs, making production numbers actually less than what I have stated in the article. Its not by a lot, but our numbers are off a bit. 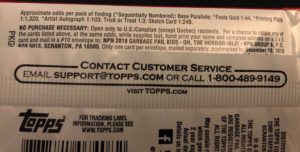 Gold borders this time are set at 1:44 packs in Collector, Retail, and Blaster packs. The exception is Fat Pack retail packs, at 1:18, if we double those we still only get 1:36, which is slightly less that it should be. If we assume the odds were printed correctly by Topps, that will throw of our numbers just slightly. In order to come up with an estimate, we will use the 1:44 number. There are 200 base cards in the set, and Gold borders are /50 on the back. Therefore, 200 X 50 number of golds per card = 10,000 total Gold borders X 44 odds = 440,000 total packs made for release. Here’s our first clue that despite cancelling Gravity feed packs, production is slightly up vs. the previous series.

Can we be sure about 440,000 packs being made? We use to be able to double check by using Artist Autographs. However, with this series, Topps made the odds much easier on autos in Collector boxes. We won’t be able to get close. We also can’t use plates for the same reason. We are going to go with the 440,000 as total number of packs. I think its the right number, and other calculations in the article show its a logical choice. 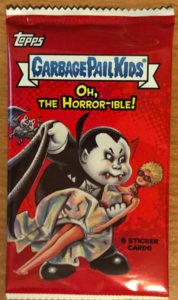 This is quite possibly the easiest Collector packs have been to figure out. In the past Topps had to round the odds on red and blue parallels, thus throwing off the numbers just a bit. However, based on actual box breaks it shows the odds are true to form, with an average of 8 blues and 6 reds coming from each box. I’m confident 60,000 is a good number to use for Collector pack production, (Its probably closer to the 59,000 number, but I’m going to use 60,000 to make our calculations easier. This shows that production for Collector packs is up, way up. The hardcore GPK collector came out in a big way to purchase Collector boxes. As you will see below its a 35% increase in production compared to WHT80’s.

How about other pack types? Once again Hobby boxes are nonexistent, and exist in name only. Starting with Adam-Geddon Topps has made Hobby boxes the same as Regular Retail boxes. There are no longer any marks on the packs or boxes that distinguish a Hobby box vs. a Retail display box. Also, the odds are exactly the same. Since all cards types are the same there is no way to tell how many Hobby/Retail boxes were produced. Sadly the same holds true for retail packs. In order to determine how many different types of retail packs were made, we would need a card type that is only in one type of retail pack, and we know how many were made. The only cards types that are individual to retail packs are Loaded Sketches and Panoramic Sketches. Topps no longer releases how many sketches are inserted into each pack type.

So just like with We Hate the 80’s the rest of our discussion will combine all Hobby/Retail pack types into one number. Keep in mind a Fat Pack Retail pack counts as 2 packs in our numbers.

We know there are 60,000 Collector packs. How many Retail/Hobby packs to we have? 440,000 total packs – 60,000 Collector packs = 380,000 Retail/Hobby packs. It would appear with the cancellation of Gravity Feed packs, the production of retail is slightly decreased from WHT80’s. However, one thing that is obvious from looking at the odds is Topps made up quite a bit for cancelling the Gravity feeds by increasing production on both Blaster and Fat Packs. Odds on loaded sketches are 27% tougher than the previous set, and that’s with more sketch artists. Likewise odds for pano sketches are just shy of 25% higher. Even though Gravity feeds were cancelled there isn’t a huge different in retail production.

(Once again our numbers are slightly off due to the easier Jumbo Retail odds. So there is actually slightly less retail produced than stated.)

The numbers produce a fascinating story for Topps on the newest GPK set. The good news for Topps? Overall production appears to be up for the first time since the Trashy TV set. This is especially true with Collector pack production. Clearly the Horror theme was well received by GPK collectors, and it showed with their orders. The bad news for Topps? It appears Target is out of the gravity feed business. Is that because of declining consumer demand with GPK? Or is it because of updated store card displays? Whatever the reason, retail production is down overall, albeit not be much. Take a look any the last five sets and the production numbers:

Topps prints to order their product. Which means based on distributor pre-orders, Topps decides how much product to produce. While the numbers show very similar production of Oh the Hour-ible to the previous three sets, that doesn’t tell the whole story. There were some big swings this series with the cancellation of Gravity Feed packs and the huge increase in Collector pack numbers. Topps has already announced there will once again be no Gravity feed packs for the next retail set, 2019S1 We Hate the 90’s. So, will Collector box numbers stay high? Will retail demand increase due to the success of Oh the Horror-ible? A lot of interesting answers ahead next January.

I have a lot of fun trying to figure this stuff out. Let me know your thoughts on the numbers in the comments!

This is Part 1 of a two part series on the production of 2018S2 Garbage Pail Kids Oh the Horror-ible. In Part 2 we will look at production numbers for all parallel and insert sets. Part 2 will be posted soon.

One Reply to “How Many 2018S2 GPK Oh the Horror-ible Cards Were Produced? Part 1”