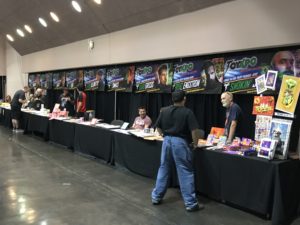 Overlooking California’s Great America theme park and Levi Stadium, home of the NFL’s San Francisco 49ers, Garbage Pail Kids artists and collectors from around the country gathered for the latest Gross Card Con. This past weekend was the third Gross Card Con event, this time held at the ToyXpo in Santa Clara, California. This event was smaller in nature compared to previous events in Las Vegas. There were both less artists in attendance and less events planned. However, collectors that did attend had fun spending time with the artists. 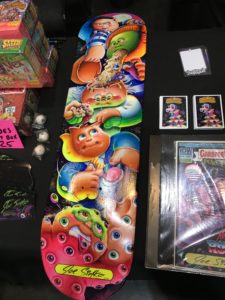 Once again the highlight of the show were the nine artists in attendance. Former original GPK artist Tom Bunk lead a group of top notch current artists that included; Brent Engstrom, Joe Simko, David Gross, Layron DeJarnette, Joe McWilliams, Michael Barnard, and Chad Scheres. Former GPK Art Director and artist Jeff Zapata also attended the show. Each artists came selling everything from original GPK artwork and roughs, to their own GPK creations, to prints featuring other themes, to sketches, skateboards, and more. Perhaps the highlight of the show were two skateboard decks hand painted by Joe Simko prior to the show. One deck sold the first 10 mins. of the show opening on Friday. The decks are just gorgeous in person.

Another show highlight was a sneak peek at some of the artwork for the next retail GPK set, 2018S2 Oh the Horror-ible. Both David Gross and Smokin Joe McWilliams had a few final paintings from the new series on hand to show off. Once again the artwork is beautiful in person. Collectors were eager and excited to see what the next set has to offer. 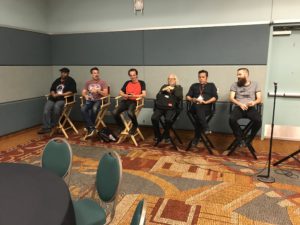 Friday evening sew the artist Q&A session. Bunk, Zapata, Engstrom, Gross, Simko, and DeJarnette all spent time answering questions from the moderator and collectors on hand. Artists answered a wide range of questions from their favorite GPK, to info on the next set, to even questions about the upcoming video game. GPKNews streamed the session on Facebook Live, video from the event can be found here.

With each show comes an exclusive show card set. This time each artist created two cards for the show set, one skateboard themed, and another 80’s themed. This set also had card back art for the first time. Half the cards had a bio for each of the artists, while the other half of the cards made a puzzle with artwork completed by Michael Barnard from a Jay Lynch concept. The 18 card set came in two variations, glossy and cloth. Collectors purchasing a glossy set at the show had a change to pull a redemption for a sketch, GPK merchandise, or a show t-shirt. By Saturday evening, already more than half of the sketches had been claimed. If you weren’t able to attend the show, Clint at GPK & Wacky Warehouse will have sets available online.

After the show ended Saturday night there was a screening of the excellent 30 Years of Garbage documentary Co-Directed by Joe Simko and Jeff Zapata. Held in the Convention Center Theatre, collectors could relax and learn their GPK history.

Collectors and artists that attended the show both agreed they had a great time seeing each other and being able to spend a little time chatting. Foot traffic for the show, especially Friday, was much less than the previous events in Las Vegas. The smaller crowds did allow the collectors there to get quality time visiting with artists. Planning is already underway for the next Gross Card con in Las Vegas. The show is scheduled to take place at the Westgate Hotel and Convention Center, just off the strip, from Mar. 1-3, 2019. Details for the show including GPK artists and events have not yet been announced. However, last year’s GCC in Vegas was the largest GPK show yet, and show organizers will surely want to try to top that next year.