After a big turnout this last February in Las Vegas, details are now coming together for Gross Card Con events in Santa Clara, CA this year and Las Vegas next year. Show promoters have decided to expand the Gross Card Con into a second show. GCC at the ToyXpo is set to take place Aug. 24-26 at the Santa Clara Convention Center. 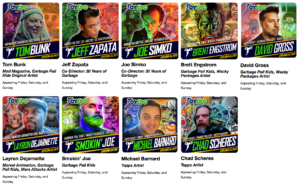 While this version of GCC isn’t expected to be as big as the Vegas show, details have been announced for GPK specific events during the weekend. Nine current and former GPK artists are schedule to attend the show, all the artists also attended this past Vegas show. Set to attend are, Tom Bunk, Brent Engstrom, Joe Simko, David Gross, Jeff Zapata, Joe McWilliams, Layron DeJarnette, Michael Barnard, and Chad Scheres. Michael Barnard contributed the official artwork for the show. There will be a Q&A session with the artists on Friday afternoon during my the show. There will also be a showing of the 30 Years of Garbage documentary. Anyone with a ticket to the ToyXpo will be able to attend the showing at the on site theater. The showing is scheduled to take place Saturday night after show hours.

Attendees to the Vegas GCC earlier this year will find similar ticket options in Santa Clara. General admission tickets are available in a three day bundle or for individual days. The regular VIP package is available again for $150. That ticket included early admission everyday of the show, and admission to dinner Saturday. The Super VIP package returns, but with a number of changes. For the Santa Clara show the package costs $350, but unlike Vegas does not include hotel rooms. Super VIP ticket holders will receive a number of goodies, but nothing GPK specific. With this being the first show in the Bay Area show promoters went with a simplier approach to Super VIP tickets.

Just like previous shows, there will be a exclusive card set being offered. There will be a few exciting changes at the Santa Clara show. The set will consist of 18 cards broken down into two subsets, Skateboards and 80’s. Each of the nine artists attending will do a card for each subset. The sets will be sold sealed. For the first time, randomly inserted into sets sold at the show, will be sketch cards, show t-shirts, and merchandise awards from GPK & Wacky Warehouse. Sets will be available after the show, but the only way to have a chance at getting something randomly inserted is to buy a set at the show. More details along with pricing will be available closer to the show. The sets will once again be sold at the GPK & Wacky Warehouse booth at the show. 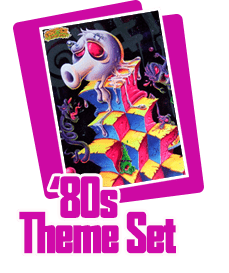 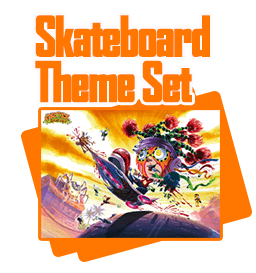 Planning for the Santa Clara show hasn’t stopped show promoters from planning next years Las Vegas Gross Card Con. The Las Vegas Toy Con is changing venues for 2019. The show is set to take place at the Westgate Hotel, just off the Vegas strip from March 1-3, 2019. The new venture allows for a much larger continuous floor space, in addition to a higher quality hotel experience.

While there isn’t a lot of show details to report, tickets for the event are now on sale. The biggest change is to the Super VIP tickets. Gone are the different tickets for each different subject. In its place is one all encompassing Super VIP ticket. Purchasers of the SUPER VIP ticket will be treated to all the free goodies offered, up to there times more than the previous show. Of interest to GPK collectors will be the show exclusive card set and an autographed copy of the 30 Years to Garbage DVD. The ticket also includes 3 nights at the Westgate hotel, early entry each day of the show, and the VIP dinner Sat. night. Also included will be a VIP Concierge service that included a hot breakfast each morning, as well as snacks and drinks throughout the day. Due to the upgraded hotel, VIP concierge service, and additional goodies show promoters have raised the cost of the SUPER VIP ticket to $1000. If you are sharing a room with someone you can get two Super VIP tickets for $1500. The Super VIP tickets are limited to 100, and as of this writing are already half sold. Other ticket options remain such as the regular VIP package. That package costs $150 and included the Sat night dinner, and early access to the show all three days. General admission tickets for the weekend and individual days will also be available.