Late last week Topps officially announced the details for the next retail set by releasing the Hobby/Collector sell sheet for 2018 Series 2 Garbage Pail Kids Oh the Horror-ible. Thanks to Wildwood Enterprises we are able to bring you the retail sell sheet. While the configuration of the next set is similar to previous releases, Topps is making a number of changes this time. This time 200 cards make up the base set, (100 new cards in a/b versions). This is an increase over the last couple of releases. Once again, the set will be broken down into various subsets all based on horror and sci-fi themes. That’s not all the changes Topps has in store.

Retail 24 pack boxes, and Target Gravity Feed 36 pack boxes are set to return once again. Puke (Green) parallels will return 1 per pack in all retail pack types. Fool’s Gold borders randomly inserted in all pack types are also back and limited to /50 of each. Phlegm (Yellow) parallels will once again be found 1:4 packs in Target Gravity Feed boxes. Topps will debut a new Insert set called Trick or Treats. These are described as Halloween candy inspired GPKs. They will only be found in Target Gravity Feed packs. Finally, regular sized sketches, artist autographs, and printing plates will be randomly inserted in all retail pack types.

Blaster Boxes (Value Box) will return once again and be sold in two versions. However, this time around there isn’t much difference in the “EA” and “SE” versions. After exhausting all Gross Bears artwork, it looks like Topps will focus only on Bathroom Buddies. Both boxes will contains 3 “lost unpublished Series 2 artwork” from the Bathroom Buddies sets. The only difference in boxes appears to be one will have a $9.99 price label, and the other box without. Blaster boxes will continue to have 5 packs each, and contain 16 boxes per case. The popular Loaded Puzzle sketches will be randomly inserted into Blaster boxes once again.

Fat Packs also return to the retail lineup. These packs are roughly twice the size of regular pack. The “Classic” insert series returns as each Fat pack will contain 2 Classic Monster Stickers. These are reprints of past GPK monsters. Dead Ted and Nasty Nick both appear on the sell sheet. Each Fat pack also contains 2 Puke parallels. Topps will be adding a brand new parallel type called “Jelly”. No details on what those will look like yet. Those are set to fall 1 per Fat pack. Much like previous releases, Panoramic sketch cards will also be randomly inserted into Fat packs.

To view the Retail sell sheet as a PDF click here, or check out the pictures below. 2018 Series 2 Garbage Pail Kids Oh the Horrible is set to release Sept. 19, 2018. 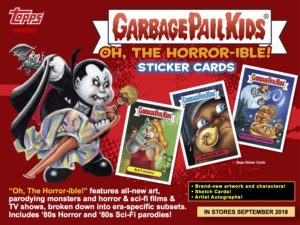 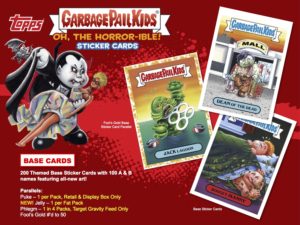 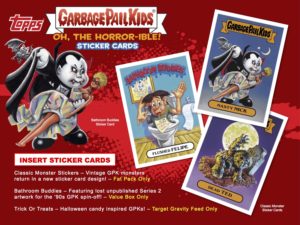 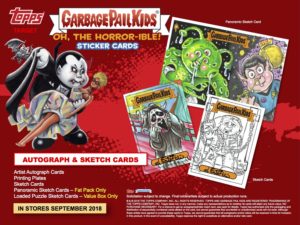