Chenduz has been a fan favorite sketch artist for a number of sets now, a sketch card veteran. Sitting down with Vincenzo at the Gross Card Con in Las Vegas was a highlight. He was so appreciative of being able to attend. His attitude was contagious. You could tell he loved meeting the GPK artists and collectors. GPK collectors kept him busy during the show with commission requests. In the interview we talk about how he first found GPKs as a kid, how the kids in the Netherlands would battle for the cards, and what the future holds for his sketch art.

GPKNews – You started doing GPK sketches with the 2015S1 set. Dare I say you are one of the GPK sketch veterans now. You live in the Netherlands, how does someone living overseas get the attention of Topps, and hired on to work on sketches?

Vincenzo D’Ippolito – Well I actually don’t know. I started doing fan art. On the forums some guy saw my sketch card, and he offered to buy the card. I said sure, I was not expecting that. That started the ball rolling. I think it started off there.

GPKNews – What other cards sets have you worked on for Topps or other companies?

VD – I started on the Wacky Packages Old School Series 5. After that I had to prove myself again with Wacky Packages set 2014 series 1. After that I got the invite for GPK 2015. Now for Topps I’m doing Star Wars and Walking Dead. I’m also working for Upper Deck, I did a Spiderman set last year. I have a new project coming up for Upper Deck. I worked with Neal Camera on the Monster series. I’m on the list for Cryptozoic. I just missed the boat for Rick and Morty, but I will help on the next set I hope.

GPKNews – What are your memories of GPK as a kid? Did you collect?

VD – Yeah, there was one day I was in the mall with my mom and little brother. We were grocery shopping and my eye caught the pink packs in the cigarette section. I said what is that? I picked it up and just bought it for the gum. I wasn’t even sure what it was. It’s like you bought a piece of gum and three cards came with it. Then you saw all these funny faces. Then when you arrived at school it was crazy. People were trading the cards. In the Netherlands we battled each other with the cards. We played a game where you throw the card against the wall. The one who’s closest to the wall, won. So we battled.

GPKNews – How hard was it to get your hands on cards back then? Did you collect the European releases or the US releases?

VD – The cards were everywhere. If you went around the corner where they sold the candy there were 400 wrappers everywhere. The most series we saw were the black ones, series 5. Then the red ones, the UK series. These were all the UK releases. One day a kid at school came back from vacation, and he had a bigger Garbage Pail Kids card than I was used to. I was like what is it, he showed it to me and it was Melba Toast. I said to myself there’s more than series 6 out there. He told us these are the original ones. The arrow was different, it was pointing to the die-cut. I asked him to battle that card. I put up like 30 UK cards, and we started throwing against the wall, and I won. That’s my first US card, and I still have it at home. That’s how I discovered US GPKs.

GPKNews – What was the GPK collecting community like back then? Did you have friends that collected?

VD – Yes mostly the guys, I don’t remember any girls playing with the cards. The kids had stacks of cards in their backpacks with elastic around them. Nobody cared about mint condition. It was all about the quantity. We would put up stacks against each other, it was three straight years in a row.

GPKNews – How is the collecting community in Netherlands now? Do you know anyone there that collects?

VD – Yeah I know a couple of guys that collect. There is one friend of mine, Stephen, he lives around the corner from me. He’s a huge collector. He collects final art. My brother is a huge collector. I still try to fill out everything, besides the parallels because it gets a little extreme. For me base sets are like the main thing, and I always pick a character with a nice autograph. The most I like is my name, Vinnie or Vincent. 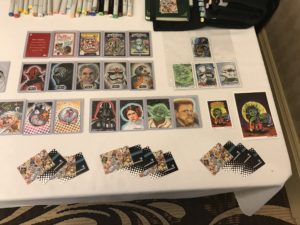 GPKNews – You have been a sketch card fan favorite. Collectors look forward to seeing your work each release. You’ve done sketches on 8 releases now. Is it hard to keep things from getting stale? What do you do differently each release?

VD – For me even if I have to draw Adam Bomb 10 times, it comes out different 10 times. It depends on the day and the mood. You want to keep on changing, you want to add new colors. I did the half tone dots and the splash. You want to keep improving and surprise the people with a nice card. I can’t get enough of the Garbage Pail Kids.

GPKNews – So far you’ve only done sketches for GPK. Have you thought about trying your hand are doing final card paintings?

VD – Wow, I don’t think its up to me. I’ve already showed my dedication to the brand. I’m still going hard core. I really hope to do a final art one day. Even if its just one, I would love to do it.

GPKNews – This is your first GCC. Do you attend cons in the Netherlands as an artist?

VD – We did one in 2016, in my home town of Rotterdam. The excitement was beyond the sketch card part I’m doing. We don’t have Garbage Pail Kids anymore at the moment in Holland. Non-Sports cards are not big, so its really difficult. They walk by and say they remember them from when they were a kid, and they ask about the cards, but not really for the sketch cards. For me sitting there is tough. Being here is like a dream come true. Everybody knows you, I get requests. Its beyond what I expected.

GPKNews – What are you thoughts about GCC? How as the GPK fan interaction been for you?

VD – Wow, its mind blowing. I should be on the other side of the tables. Meeting all the artists I admire and look up to. They are so friendly. Even the fans its ridiculous. I didn’t know so many people were into my art and sketch cards. Shaking hands and spreading the love, that’s the thing. GPK is all day every day.

VD – My number one, its difficult. You can’t beat Adam Bomb, he’s like the plush toy you take to sleep. If I have to choose one, its the Dracula guy, number one, the vampire, Nasty Nick. Its the funnest thing with the Barbie doll. Its like Alien Ian has the same thing going on, grabbing the girl and being amor. I think that’s my favorite one. All the return cards I get from artists are all Nasty Nick, they know I want the Vampire guy. There’s no C name for that one, but if there was a C name it would be Vampire Vinnie!