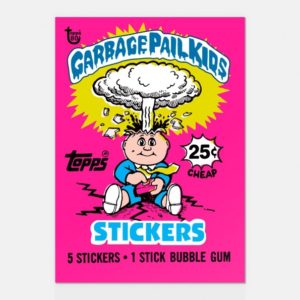 As part of their 80th anniversary, Topps has launched a year long online set focused on wrapper reprints of Topps sets through the year. Last week GPK made their first appearance with a wrapper based off of OS 1 from 1985. Today Topps revealed the print run for the 80th Anniversary Wrapper Art Card #23 1985 Garbage Pail Kids. In a bit of a surprise sales of the GPK card smashed sales records for the set. According to Topps the card sold 969 copies. With 24 cards so far released in the set, the card becomes the highest selling card to date. The previous highest card, was card #1, 1966 Batman, that sold 707 copies. What do these results tell Topps? Does it show there’s a large following for classic GPK stuff? Could it mean additional GPK wrapper cards will make an appearance later in the set? Would Topps use these results to change their minds on a product like Chrome OS 3? Lots of interesting questions for Topps with sales results such as these.