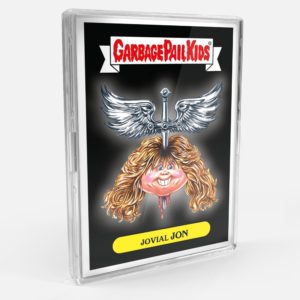 This year’s Rock & Roll Hall of Fame inductions are over, but did fans show up to buy their GPKs? Today Topps revealed the print run for 2018 Garbage Pail Kids Rock & Roll Hall of Lame online set. After calling the set “Hall of Fame” during the week it was for sale it appears Topps has changed the name of the set back to the previously used “Hall of Lame”. Sales for the set continue to be strong compared to online sets from last year. Sales for the 9 card all GPK set came in at 171 total copies sold, almost the same as the recent Not-Scars set. There might be a lull in online sets, as award shows are over and we are holidayless for the next few weeks.