After word began to leak recently that the theme for the next set would be Horror, it was only a matter of time before Topps began to solicit for the product. Today, Topps officially announced 2018 Series 2 Garbage Pail Kids Oh the Horrible. The set will feature parodies of everything horror and science fiction. After last year’s successful Halloween set, Topps saw that the horror theme was something GPK fans naturally latched on to. The artists also took the theme to heart. In their excitement over 300 concepts were submitted to Topps for the set. After narrowing it down to 100, Topps is ready for what might be the most anticipated themed GPK set yet.

Topps is making a few changes this time around to the base setup. The complete set consists of 200 cards, made up of 100 new pieces of artwork available in a/b versions. This is up from the previous sets of 180 cards. Once again the set will be broken into various subsets in horror and science fiction themes. The familiar parallel format returns. All Hobby and Retail packs will contain one Puke (Green) parallel. Fool’s Gold parallels will once again be numbered /50, and are available in all pack types. Also, Bruised (Black), Spit (Blue) /99, and Bloody Nose (Red) /75 parallels will only appear in Collector packs. Collector packs will also contain an insert set called Horror Film Poster Parodies. These are Wacky Packages inspired parodies of famous horror films. Most likely these will fall one per Collector Box.

Artist autographs and printing plates will continue to be found in all pack types. Hobby and Retail packs will have regular sketches inserted. Collector boxes are once again guaranteed one hit per box, either a shaped sketch, artist auto, printing plate, or patch card. For the first time the die-cut sketches will be available both in the traditional trashcan shape, and the brand new coffin shape. Dual artist panoramic sketch cards which debuted in the 30th anniversary set are no longer mentioned on the sell sheet. Instead a new sketch type called the, “Tryptych”, will debut and be found in Collector packs. This new sketch is a three panel foldout sketch.

Once again the overall construction of the set is familiar to the other theme sets released the past few years. Once we get retail sell sheet info, I will pass it along. For now you can see the sell sheet here in PDF form, or check out the pictures below. There is also a gallery of examples of the cards for the new set. 2018S2 GPK Oh the Horror-ible is set to hit stores on Sept. 19, 2018. 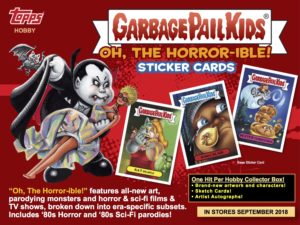 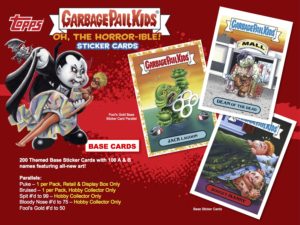 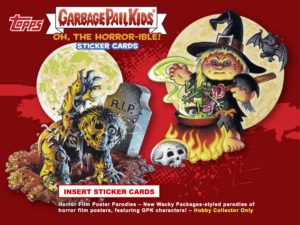 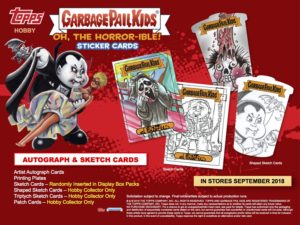