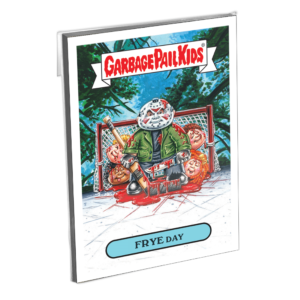 While sell sheets haven’t been released yet, Topps has started sending out invites to sketch artists for the next Garbage Pail Kids set. In the email to artists it’s mentioned the theme of the next retail set will be “Horror”. Artists are encouraged to do some sketch cards based on previous horror themed GPKs. Last year’s most successful online set, Halloween, was horror focused and paved the wave for the upcoming retail set.

Another big piece of news to come from the artist sketch invites is a new type of sketch card will debut in GPK. The new sketch is called a “Tryptych”. These are 3 panel connected sketch cards much like the panoramic cards have 2 panels. There is no mention of dual artist pano sketches on the invites. These new tri-panel sketches might be replacing them. Artists are set to complete a similar number of sketches as previous series. The due date is set for mid-June for the sketches to be returned by artists to Topps.

Generally sell sheets are released before the sketch invites. You can expect Topps to release official information on the upcoming set including release date.