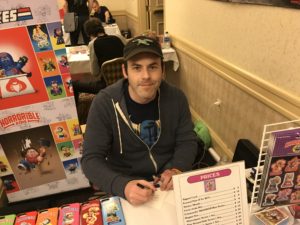 Popular GPK artist, Mark Pingitore left Topps just over a year ago to focus on his own Magic Marker Art store and products. Throughout 2017 Mark put out some amazing items, that collectors have taking a liking to. I was able to sit down and catch up with Mark at the Gross Card Con in Las Vegas. We talked about how the first year on his own has been, his thoughts on digital artwork, and what’s in store in 2018 for Magic Marker Art.

GPKNews – 2017 started off eventful for you as you decided to leave Topps and focus on your own art. How has year one gone for you? What’s it like being your own boss?

Mark Pingitore – Its been going great. I’ve actually had probably one of my best years since I’ve been working on my own since I’ve started art as a career. Last year was really good. I was happy with how that went, and looking forward to this year.

GPKNews – Was it scary leaving Topps? Is there anything you regret about that decision?

MP – When you have a big decision like that, it always goes through your mind whether you made the right decision or not. There’s always some questions about that. Overall I’m really happy with how its been going. Happy to be doing my own work and how its been turning out.

GPKNews – Your Magic Marker Art company released a number of sets in 2017, ending with Star Warped Kids Series 1. How has the reception been to the sets? 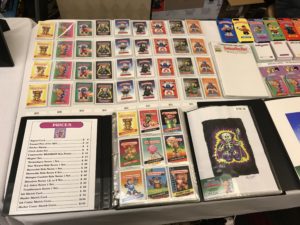 MP – It’s been great. I’ve been really appreciative to all the fans who have been keeping up with my work and all the different projects I’m doing. I can’t thank them enough for picking up the releases I’ve been putting out.

GPKNews – You’ve also released a number of other merchandise items featuring the same characters from your sets from pins, magnets, t-shirts, sticker sheets. Is there anything collectors seem to prefer?

MP – There’s different collectors it seems. Some like the cards, while a separate group of collectors like the pins. It depends on what their preference is. Thankfully I’ve found there are different avenues for different mediums to support them.

GPKNews – I’ve asked a few artists this, and wanted to get your thoughts. I believe you’ve dabbled in digital work before. What thoughts do you have, specifically when it comes to GPK art or the art you do for your sets, on creating cards digitally vs. the old fashioned way?

MP – As far as the amount of work that goes into either, its about the same I think. There’s just a different feel to it. I don’t know what it is, but you can tell the tactile nature of the actual physical paintings in the print. I feel like it comes off better. Me personally, I started out doing digital, its just a different skill set doing them. It takes a while to switch over from digital to physical. If you know what you’re doing you can get great results with either. Me personally, I’ve gravitated towards doing the physical stuff now. I feel like it prints better, and you have something you can sell, like the one of a kind artwork.

GPKNews – Do you think we will see the day where the main way of creating GPKs or the like are done digitally?

MP – I don’t know if physical paintings will ever disappear. I know people have their preference. I see different media going digital, like 3d sculpting is something I’ve seen more popular. I don’t think either go away. I see an interest in both of them, I don’t think one will negate the other. 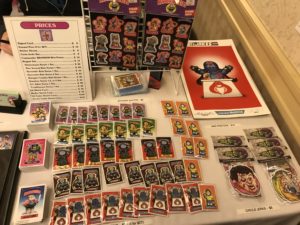 GPKNews – What does 2018 hold for Magic Marker Art? I know you have the new Nintendopes Seres 1 set here at the show. What other sets do you have planned?

GPKNews – Do you ever envision returning to Topps in the future and working on GPKs?

MP – I don’t think with the current team there. Maybe if there was a switch up with the current direction they were going or change in their focus, maybe going back to the original without the theme sets. If there was new management there, maybe. Never say never.

GPKNews – Finally, this is your second GCC here in Vegas. How does this one compare to the first? How has the fan interaction been?

MP – It’s been great. Its a different atmosphere than the last one. Yesterday was great. It’s been great seeing some familiar faces and meeting new fans who are coming out this year. Overall it’s been a success again this year.