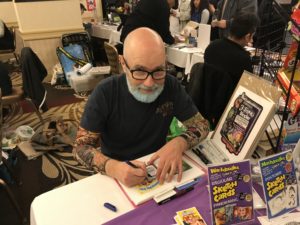 Smokin’ Joe McWilliams hit the ground running with Garbage Pail Kids in 2017, and collectors have been really pleased with his work. While Joe is new the the GPK world, he’s worked for Topps for a number of year’s as one of the Wacky Package artists. I sat down with Joe at this year’s Gross Card Con is Las Vegas. We talked about how he got his start with Topps, the differences between painting GPKs and Wacky’s, and his new upcoming website venture.

GPKNews – While you recently just started working on GPKs, you’ve been working with Topps on Wacky Packages for a while now. When did you first start working for Topps, what was your first project? How did you get your foot in the door at Topps?

Joe McWilliams – I was a Wacky Packages fan from the original series back in the 70’s. I missed the feeling opening a pack of Wacky’s and that excitement you get, the smell of the gum and everything. So, I decided back in 2005 to start designing my own Wacky Packages. I had 3 or 4 of them done when I heard that Topps was doing All New Series Wacky’s. I sent them a letter and showed them the ones I had done. The letter said “Dear Wack-jobs, I collected your Wacky’s as a kid, thank you very much. I can prove it because I have all the scars in my mouth from the razor sharp gum. I’m a successful artist and I would love to waste my time doing Wacky Packages. Until Mad Magazine calls and I’ll know I’ve hit rock bottom.” Two weeks later I get a message from Jeff Zapata saying I just got a letter from you. That was for ANS 3, I got 15 gags in there, a couple got painted by John Pound and other artists. The first one I painted was Coka-Cobra. I couldn’t believe in all the years of Wacky Packages nobody had done the largest brand on the planet. I figured if I can land this, I’m in, be part of the history. I wrote what I thought was a good joke, and they liked it. I painted five different versions of it to familiarize myself with the paints and to try to get it right. I sent the best one in and its kind of become my iconic original Wacky. I painted Wacky Packages for all the ANS series.

I was also holding down a full time job. When they asked me to do the Garbage Pail Kids, I couldn’t do that. Then a few years later I left that job and became freelance only in 2013, and said hay I’ll do GPK now, throw some of that my way. It took them until 2017 before I could figure out how to get into the door submitting ideas for the online Trumpocracy series, and they said yes paint that, paint that, and that. Then I did sketch cards. Then, for for Battle of the Bands they asked me to submit ideas and I got 7 base paintings in that, then the same for We Hate the 80’s, I got a couple paintings that one. I’ve submitted a bunch of designs for the next series, and I have a couple of approvals there.

GPKNews – How aware of GPKs were you as a kid? Did you collect?

JM – I was a Wacky’s guy. When Garbage Pail Kids came out, I was a senior in high school. My only connection to it was, I didn’t even know GPK at that point, but I know Cabbage Patch Dolls were out. I was in journalism class and we had to do a video of a news broadcast. I was the anchor and I did a story on we lost this year’s crop of Cabbage Dolls due to cabbage rot. I brought up a doll with spaghetti hanging off of it for the parody there. That was my first attempt at that kind of humor on that subject. I knew all the other kids were into the GPK at the time, but I was into girls and drinking by then, I wasn’t collecting them.

GPKNews – You’ve done a number of GPK cards in the last couple of retail sets. Collectors also really seem to enjoy your pack inserted sketch cards. Are you having fun working on the GPK brand?

JM – I am, because its not a lot of lettering which gets tedious on the Wacky Packages. Painting all those little letters are painful on your fingers. Designing the cards is a fun job. They can go anywhere and do anything, I like that. Doing big characters is a lot more fun then doing tiny stuff.

JM – You can get a lot more expression in them even though there is a standard look. Because you are dealing with a much larger character, they can bend reality with the things they are doing. There’s really nothing that is off limits. I’m less of a body joke person and I love exploring the twilight zone aspect of it. If I can slip a common social comment in there somehow I kind of like that, but I don’t want to go political if I can avoid it. Listening to the fans, I know they love the kids rather than the Garbage Pail adults so I’m trying to keep my mindset there.

GPKNews – You are going to be launching a new website, monstersgopop.com. Tell me a little bit about the site? What will collectors find there? 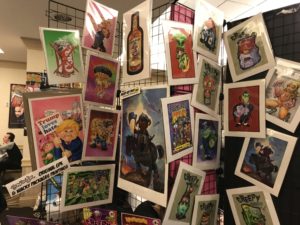 JM – I’m wanting it to be a watering hole for collectors to go to find all the original art for these card series, and then a lot of these personal card sets these artists are doing on the side. The main thing is the art gallery side of it. You can get original art and art prints directly from the artist. I will not be the middle man. I’m just giving them the shelf space. When you want to buy a piece from somebody it will just link right to them to make that purchase. So collectors don’t have to go searching each different guy, trying to figure out how to get in touch with them and find their work. We don’t have to auction it off, we can just make an art gallery. Thats the main idea.

GPKNews – Have you seen the 30 Years of Garbage movie that Joe and Jeff directed? What were your thoughts of the movie?

JM – I thought it was really well done. I love the history of it. I love seeing the other artists being interviewed in their studios. I’m a fan of seeing what materials they work with, how they setup. I just think that’s really interesting.

GPKNews – This is your second GCC in Las Vegas. How does this one compare to the first? Do you enjoy meeting and chatting with the fans?

JM – It’s good now that I’m officially in the club, and everyone’s seen my sketch cards and appreciated them and like the way I’m going with that. I’m an old school Mad Magazine reader so that black, white, and gray approach is a holdover to how I was taught from Mad Magazine illustrations. That response has been really really well.

GPKNews – Finally what is your favorite GPK?

JM – I’ll always love the monsters, but Joe Blow of course, the name sake. They did it right by naming the kids because everyone has their namesake favorite. I like Creepy Carol a lot. I don’t think she gets enough love among the monsters. Hairy Harriet, she’s fun to draw. She’s got a lot to work with. I usually trim her beard or cutting herself up somehow. I used to do a lot of hair illustration back in the 80’s, rock band type of stuff, so I got good at doing masses of hair. I enjoy that.