Gross Card Con is expanding. The same people behind the recent GCC even in Las Vegas announced they are bringing the fun to the Bay Area ToyXpo. The show is set to take place Aug. 24-26 at the Santa Clara Convention Center in Santa Clara, CA. Once again, the event will take place inside the larger toy and comic convention. The show first announced GCC would be appearing a couple of weeks ago, but only today began releasing details on the show. While not a large as the Las Vegas GCC, there is still a very strong lineup of artists scheduled to attend. Right now there are 9 current and former GPK artists set to attend. The show will feature former original series artist Tom Bunk. Also, current artists Joe Simko, Brent Engstrom, David Gross, Layron DeJarnette, Joe McWilliams, Michael Barnard, and Chad Scheres are all set to be there in addition to former artist and art director Jeff Zapata. No other GCC events have been announced yet for the show.

The show also has a Super VIP option for GCC collectors they are offering. The cost of $1000, which is up from the Las Vegas cost. The package includes 3 nights at the host hotel (TBD), early admission to all three days of the show, 4 event exclusive renderings, 1 custom GPK Pop, B&W sketch, and the Saturday VIP dinner. Tickets for the show are available at the show’s website. 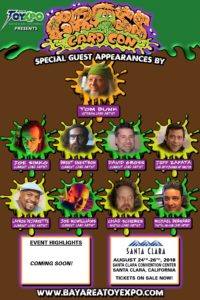