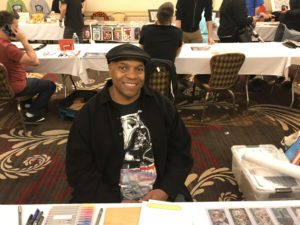 Being one of the longer tenured GPK artists isn’t all Layron DeJarnette does. He’s an accomplished artist who besides his Topps projects also currently works for Marvel Animation. He’s also worked for Disney in the past, as well as other card and comic companies. I sat down with Layron at Gross Card Con in Las Vegas. We talked about how he got started with Topps, some of his favorite projects he’s worked on, and perhaps his biggest GPK claim to fame his appearance on A&E’s Storage Wars.

GPKNews – You started working on the GPK brand with the ANS 5 set. Was that your first Topps project? How did you get started with Topps?

Layron DeJarnette – I’ll make a long story short short. At the time I was working with the Wayans brothers. They had a Topps card line called The Dozens. They were signing the cards at a booth at the San Diego Comic Con in 2004. I went to meet them at the Topps booth but they were being held over at a panel discussion to promote the movie. At the time the Art Director, Jeff Zapata, was there. He said let me take a look at your portfolio so you don’t have to waste a trip. At that time he looked at the portfolio and offered me to work on Wacky Packages and Garbage Pail Kids.

GPKNews – How aware of GPKs were you as a kid? Did you collect?

LD – Yes I did, but I was mainly a Wacky Packages collector. At the time as a kid I identified with the Wacky Packages more than the Garbage Pail Kids. As I got older I appreciated all the Topps brands. My two favorite ones were Wacky Packages and Mars Attacks.

GPKNews – I’ve noticed you are a busy artist! Besides working for Topps, you’ve done work for other card companies, comic companies, and even Disney. Is painting GPKs still as fun now as it was when you started?

LD – Yes, I actually like working on GPK because a lot of the other jobs require digital work. It’s a lot faster to get done, but I’m a traditional artist. So for me, if I do a lot of digital work I feel like I have to do some painting. So Garbage Pail Kids, any of the Topps brands, are traditional paint, so its actually a stress reliever for me. I really appreciate painting the Garbage Pail Kids or Mars Attacks.

GPKNews – Over the years the number of cards you paint for each set varies. The latest set, We Hate the 80’s I think you did 5 cards. While 2017 didn’t see as many. Is it just a timing issue for you? Have you been busy with other projects? What determines if you are featured in a set?

LD – I think its all of it. A lot of times we will get an email from Topps saying a set is coming up and we are looking for gags, like the 80’s or whatever type of theme they request for us to submit gags. In most cases, the gags that get approved the artist would like to work on their own gags. Sometimes either, a) I’m not able to submit many gags because I’m working on other projects, or b) If I submit gags and they don’t get approved then I don’t get to paint any because there other illustrators like to work on their own gags.

GPKNews – You haven’t done pack inserted sketches for a while now. Is that also just a timing issue? Do you foresee ever doing sketches again?

LD – You know it was kind of funny because I was so busy at the time I would get offered to work on sketch cards, but I would have to turn it down. Now I don’t even get offered e-mails anymore to do them, they think I’m too busy.

GPKNews – You did the art in last year’s Mark Attacks set for Topps, right? You mentioned you collected those as a kid, that must have been fun for you to work on?

LD – That was awesome that gig, I was so happy. I was like I kid in a candy store. Mars Attacks the original series I was really into . I appreciate the good art, the design of the martians, the grotesqueness of it. It was done in a cool way. Originally I was assigned half of the paintings but I wasn’t able to complete them so they were assigned to Fred Harper and I. I think I did 20 or 21 paintings.

GPKNews – I have to ask you about your big GPK claims to fame, Storage Wars! Can you believe its been almost 5 years since the episode aired? How did that come about? Did the producers just contact you out of the blue?

LD – Its kind of funny because I live in California and Storage Wars is produced in California. The producers originally contacted me to see if I could contact either John Pound or Tim Bunk. Bunk did reply, but they really wanted John Pound because he’s the man. He didn’t even reply, he didn’t want to have anything to do with it. We were talking through e-mails and they didn’t know where I lived. They said we aren’t having any luck contacting the original artists, so where do you live, we might have to come talk to you. I told them where I lived, and they realized it was 35 mins away from where the storage unit is. So they said they would just come by my place.

GPKNews – What was the filming like? How was interacting with Ivy?

LD – How reality TV works is they want to get a natural reaction. So they don’t warn you about some things. They just tell you to be prepared. They put the mic on you, so you know you’re about to be on TV and its an episode. They try not to tell you too much so they can have a general reaction. When Ivy came, I didn’t know when he was coming or anything. I just knew they wanted me to look at some cards and get my opinion. They didn’t tell me too much about the details, so when they filmed it they would get a natural response. It was surreal. It was surreal because they filmed for 3 hours but they edited it down to a short piece. They had to setup inside my house, and they had to set it up for filming. They had to set up lights and had cameras in your face. It was really hot inside, but it was great.

GPKNews – This is your second GCC in Las Vegas. How does this one compare to the first? Do you enjoy meeting and chatting with the fans?

LD – Its been great, I always like Garbage Pail Kids fans. I always say they are true fans because they appreciate everything, the art and the concepts. The community is really great. The convention is going great. The exclusive trading cards are always a seller. I’ve sold an original art piece. I have some other people who might come by later in the show to purchase some other original pieces, so hopefully I’ll sell some more.

GPKNews – Have you see the 30 Years of Garbage movie that Joe Simko and Jeff Zapata did? Did you enjoy the movie?

LD – I’ve seen it. I’m in it for just a short period of time. I love it! It’s one of those tings where I originally thought it was just going to be exclusively about Garbage Pail Kids, but it’s even more. It talks about the non-sport card community and how it started. Also, how it’s influenced pop culture. It’s just a great documentry to learn about non-sport cards.

GPKNews – What is your favorite GPK that you’ve painted? 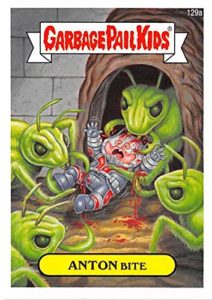 LD – Its funny because I don’t know if its a fan favorite, but so far my favorite is the GPK card based on the Marvel character Ant-Man. Just because I work at Marvel Animation as well, so its was the best of both worlds. I love Marvel superheroes and I love GPK. The Ant-Man one I painted is a parody of Ant-Man’s first cover. So to me that’s one of my favorite ones.

GPKNews – How about favorite GPK?

LD – Of course Adam Bomb is good, but I would say Dead Ted. He’s my favorite one because he’s so different. He’s a parody of famous monsters. Really great detail.