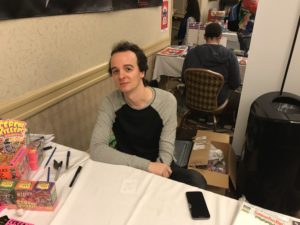 Joe Simko has been one of the core GPK artists for a number of years now. With his 30 Years of Garbage doc now complete, Topps has been keeping him busy drawing GPKs. I saw down with Joe and talked with him at this years Gross Card Con in Las Vegas. We talked about what future projects he is working on, his thoughts on the 30 Year movie, and what’s next for movie Director Joe Simko.

GPKNews – In 2017 you guys hooked up with Indican Pictures to distribute the 30 Years of Garbage documentary. The movie was released in a handful of theatres, released to numerous online streaming sites, and had a DVD release. How has working with Indican been?

Joe Simko – Indican has been great because they’re focused on distributing for small independent film makers. They really want to try to get as much word out to as many people as they can to know that it was made by small independent film makers. They’ve been great as far as staying in touch with them when we needed. We do want to get the release of our film out even wider than it is now. They’re making the steps to make sure that happens.

GPKNews – What’s next for the 30 Years doc? Any other promotional things planned with Indican?

JS – As far as streaming, hopefully now most people knows, its on all the major US sites, and there are talks to finally branching out worldwide. We did sign a contract for worldwide release. That is in development, of course as soon as we get the word we will let all the fans and collectors know.

GPKNews – Looking back at the long journey, its been probably 5 years now when you guys started planning the film, how satisfied are you with the way everything turned out?

JS – Jeff, June, and I were very satisfied to not only have a completed film, but to get to hear it from people that have seen it. The most critique we get is how much history they get from it, its actually a learning thing. It was great to hear from Adam Goldberg, who is the creator of The Goldbergs, to go back and forth with him in e-mail and talk to him on the phone. He was blown away by it. He was like, “How did you guys do this?” I was like yeah my wife sat for two years on a chair while she was pregnant editing this entire film! He was just amazed. To hear from him, he was impressed. He’s ready to push it onto Netflix with his agents, I’m like we already signed with a distributor but its good to have you in the wings. He’s a good champion of it. 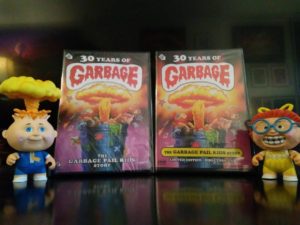 GPKNews – Do you have a highlight from the production of the movie that stands out to you? Maybe a behind the scenes story, or favorite interview?

JS – Gosh there’s so many different ones, I’m trying to think of some. The Goldberg set was a great one because we actually got to go to the set to do some of the interviews with actors from the 1987 GPK movie. We interviewed them on this Goldbergs set, its different from a lot of sets with how television shows do them. This was a real house that they built inside of a studio. So we got to go into the rooms and there’s a backyard and a front yead. I think filming the actors from the movie was great. They were super friendly. Going to their homes they had food and water out for us, they really treated us like family. They would set things out on the table that they could find. Kevin Thompson who played Allie Gator had a gold record where they did a Garbage Pail Kids song. They were very inviting and warm.

GPKNews – The feedback on the film has been overwhelmingly positive from what I’ve seen. The movie has received numerous positive reviews from various websites. I’m sure you’ve heard from all kinds of GPK fans. That has to be the best thing hearing all the great feedback?

JS – Yes, of course the GPK fan, fans of anything, are always going to be vocal so you’re going to hear what ever kind of criticism or critiques on things they’d prefer to have or people that may have been left out. It’s like we did what we could. I personally would have loved to film another two hours on the fans and go to their rooms and their collections, but I know that’s a second movie. I don’t think I’m the one to do it, I think a fan could do it cause they would probably know more about it. Jeff and I were always focused on just coming from the background of an artist, the artist who created it, we’ve got to get that history. So this would make a good first movie. If there was ever to be a second movie, hey guys anyone out there, start the collector sequel because I want to see all these crazy collections.

GPKNews – Is there anything you wish you had done differently on the film? Any interviews you weren’t able to complete for whatever reason?

JS – No, you know, there’s nothing I would do different in the pre-productions. I would say if anything maybe in the post production doing the editing I would have shelved out more money to pay for the licensing of those 80’s television news clips of Ted Copel and Dan Rather talking about Garbage Pail Kids. You know what, that needed to be in the beginning scene when the television starts appearing. It was getting into the thousands of dollars to have a newscaster. Once you get a distributor you have to pay even more money. It’s funny all these little tiny things you don’t even know, hundreds of dollars per second. So when we are editing it, we have to say ok that’s 8 seconds, can we do that? No, we have to shave some off. So if anything just the tiniest little changes. I’m very proud of it, very proud of it.

GPKNews – When’s the sequel coming out? What’s next for Film Director Joe Simko?

JS – Oh my gosh, I don’t know when the sequel will come out. Peel Here Productions is a company that now exists. Jeff, June, and I have talked about, oh we could do a Wacky Packages thing which would focus on the collector aspect of it. Now that, if you want to get into stories, these are the 10-20 year age older guys. We have doctors, lawyers, accountants from serious money, and there’s real drama, fighting and craziness. Again it’s a matter of time and money, and we have none of that. So I would love to see that be made. Peel Here Productions is still around, but for now its just 30 Years of Garbage. 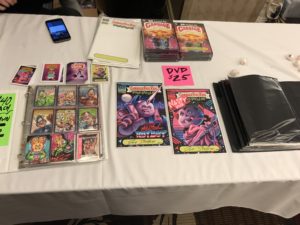 GPKNews – With 30 Years winding down, what other projects are you working on?

JS – Really Topps is keeping me busy with the Garbage Pail Kid line. We are working on the new series that will be out in the fall. Hopefully they will be able to make an announcement soon. Of course we already know, and this theme is something that fans have been wanting for a long time. I’ll just say that! The 80’s set was my favorite one ever to work on, and that inspired me to do some cool comic covers, these 80’s synth wave style. That’s what I do in my down time. Its crazy to think, I’m getting freelance work outside of Topps, but when I do get contacted by these companies or individual people they always ask can you do it GPK style. Even in the down time it’s Garbage Pail all the time.

JS – Chance is like one of the super sweetest guys, I’ve never met him in person, I’ve only talked to him online. He’s the lead animator for the Simpsons for several years now. Physically animating in California, he’s not in Korea, he’s not an in-between artist, he’s a lead animator, so he’s setting up the scenes. He is also a child of the 80’s and is trying to get his own animation series called Little Billy, based his own life experiences of having Turrets or ADD. The character Little Billy itself embodies all children that have some form of disability and bringing it to light that they are normal too, its just what makes them unique. He reached out to me, its great we connected. I did some poster work. If he gets the project off the ground, which he got his Indigogo backing, I think I’ll be involved in doing some background art for him, some cool paintings. I wish the best for him, I’m really pulling for him, I want him to get it done. He wants to do this traditional 80’s squash and stretch style animation you don’t see anymore.

GPKNews – Finally, this is your second GCC here in Vegas. How does this one compare to the first? How has the fan interaction been?

JS – Fan interaction has been great here at Gross Card Con. This has been probably my best show. The first day has been the best day I’ve had of any show. I’ve been selling original art, which is great. I think the Toy Con being in Circus Circus is a little more beneficial to the artist because we are getting a lot more foot traction from the toy crowd who maybe couldn’t find us, or who maybe didn’t have the desire to goto the second floor in the Orleans and find us where we were last year. Although we are in a smaller room there’s a lot more foot traffic. We’re getting more buyers, meeting more people, and hopefully getting them into the next generation of the garbage scene.