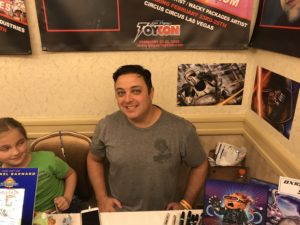 Michael Barnard is part of the new breed of GPK artist. Not only has he done sketch cards, but also final artwork for numerous online cards. While his professional life has been built around creating artwork for t-shirts, his first love is Garbage Pail Kids. I sat down with Michael at Gross Card Con in Las Vegas. We talked about how he got started with Topps, how his passion with GPK began, and him being a proponent for digital artwork.

Michael Barnard – I grew up with Garbage Pial Kids like most people. I loved them and they made me want to become an artist. I always had a thing for them. I went off and got my career started as an artist, and here and there I picked up a few packs. Looking at some of the ANS stuff got the fires burning again. I contacted a few of the guys on Facebook, Joe Simko and Brent Engstrom, and asked them who do I get in touch with, how do I get my foot in the door. They gave me Colin’s info in New York. So I came up with four originals, and mocked them up like the real ones with the logos and names and everything. I took those and a few other samples of my work and mailed them to NY. About 7-8 months later I got an e-mail asking if I wanted to do sketch cards.

GPKNews – What other card sets have you worked on for Topps or other companies?

MB – I’ve only done work for Topps. I’ve done one Wacky set, the MLB set. I’ve done many of the Star Wars sets, and a handful for The Walking Dead, but Garbage Pail Kids are my favorite.

GPKNews – What are your memories of GPK as a kid? Did you collect?

MB – I was the perfect age when these came out, I was about 9 or 10 years old. I’d say maybe 3rd series was most popular when I was able to buy them on my own. I can remember taking my lunch money and skipping lunch so I could go buy some afterwards. We had a general store next door to the house I grew up in. The lady that ran that place always carried Garbage Pail Kids. She use to let me come in and work once a month dusting off the canned goods and sweeping the floors. She would pay me in Garbage Pail Kids. She would give me complete boxes and complete sets. To this day I still have every one of them. I have thousands of OS cards from back in the day. I was into them big time.

GPKNews – In 2017 Topps added you to the lineup of final card artists for some of the online sets. I believe you had 17 cards published last year. What would 10 year old Michael have thought if he knew he’d be a GPK artist someday? 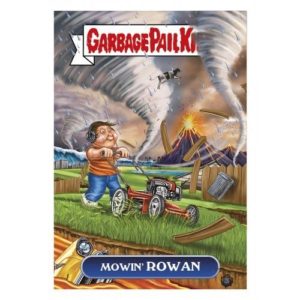 MB – My 10 year old self’s head would have exploded. It’s funny to watch my parents because they remember watching me as a kid and being so obsessed with these things. I think they are as tickled as I am that I get to work on this stuff. Its really kind of surreal. Its awesome! I take it very seriously, every sketch card I do, everything. It means a lot. It’s a big deal.

GPKNews – You are a proponent of working digitally. All your online cards were created on a computer. What are your thoughts on creating artwork digitally vs. the old fashioned way?

MB – I look at the digital stuff as a tool. I mostly design t-shirts for a living and I work with a lot of screen print companies, and in that industry it has to be digital. That’s kind of become my comfort zone. I went to a very traditional art school in Columbus, Ohio, so I do paint, I do draw, I do a lot of stuff by hand. I’ve just gotten a lot more comfortable and faster doing it digitally. I don’t know, I can see why people would still gravitate towards the more traditional oil paintings. I love that stuff too. I don’t know, I think a lot of people don’t understand how the digital stuff is done. The way I do it, with the stylist and tablet, there’s a brush stroke for everything you see. It’s still painted, its just a little different with the pixels. I think they translate better to the actual cards. I think they look cleaner and more crisp. I’m more comfortable doing digital stuff because I think I’m faster at it, but I love to paint too. I think there’s a place for both of them. I think when digital stuff is done right it can look really good.

GPKNews – What tools, software/hardware, do you use for your digital artwork?

MB – I use a Macintosh, Photoshop and Illustrator. Mostly for Garbage Pail Kids, this kind of stuff, its done in Photoshop using the different brushes. I have a Wacom tablet and stylus. The stylus is pressure sensitive so you can airbrush. If you go in there and get the details you can zoom in high resolution and really get nice detail. I use mostly Photoshop on the Mac.

GPKNews – Right now I know all retail GPKs are still painted Do you aspire one day to work on a retail set? If you ever get the chance, would you push to create cards digitally?

GPKNews – This is your first GCC. Have you ever done any other cons as an artist?

MB – Nope, this is it. Like I said I mostly do t-shirts for a living, I actually make a pretty good living doing that. I’ve never really had to do cons, or setup, or really promote myself. This is really more just for fun. Its been awesome. Its been great to come out and meet everybody, and put a face behind the Facebook profiles for people I’m use to talking to. Its been a blast.

GPKNews – What are you thoughts about GCC? How as the GPK fan interaction been for you?

MB – The show has been absolutely incredible. I didn’t really know what to expect, how much stuff to expect to move. I did more yesterday than I expected for the whole event. Its been great, absolutely awesome. Everyone has been so cool. Its like sitting here and talking with 30-40 long lost friends, everyone has the same interests, its really been cool.

GPKNews – At the show you are selling some of your own cards and prints. Do you have any other projects in the pipeline either with your own work or for another company? 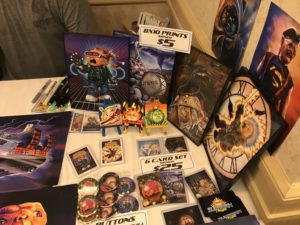 MB – I’m always looking to add to my prints. I’ve got this thing going with my 80’s themed prints. I’ve really been itching to work on a Princess Bride print. I’ve also done these mini canvases with the matching easels that are done with acrylics. People really seem to love those, so I’ve been buying up a bunch at the hobby shops. I’ve submitted some gags to Topps for some of the upcoming sets. There’s always something in the works.

GPKNews – Finally, do you have an all time favorite Garbage Pail Kid?

MB – All time favorite? I’m going to have to say, ever since I was a kid I’ve had a thing for April Showers. Something about the colors in that, the blue with the lightening bolts. I don’t know, when I was a kid there was something almost glowing about that artwork, I love that one. A lot of the OS stuff, they trigger memories and really speak to me. I don’t know if I have a specific favorite one, but if I had to pick one, that would be it.