In what they are calling a mini-release, today Creepy Co. will launch two new shirts to their line of Garbage Pail Kids merchandise. The shirts are scheduled to go on sale on Creepy’s website at 7:00 PM Central time, (5:00 PM Pacific/8:00 PM Eastern). Creepy Co. has continued to use their GPK license with Topps in new and different ways. Today’s launch marks a couple of firsts for the company with GPK merchandise. 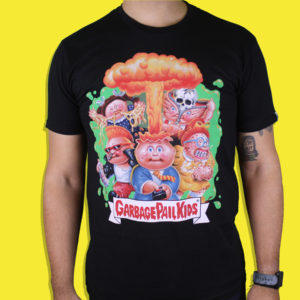 The first shirt being offered is the Garbage Pail Kids 30th Anniversary Motif Shirt. This is a black t-shirt featuring Joe Simko’s artwork that appeared on Checklist card 1a/b in 30th anniversary set. This 100% cotton shirt also features a Creepy Co. logo tag on the sleeve. This marks the first t-shirt being offered by Creepy Co. Previously, Creepy didn’t hold the GPK license to produce t-shirts. It appears that Creepy Co. has taken over that portion of the GPK license as well now. The shirt is available is sizes S-XL ($26.99), 2XL ($27.99), and 3XL-4XL ($28.99). 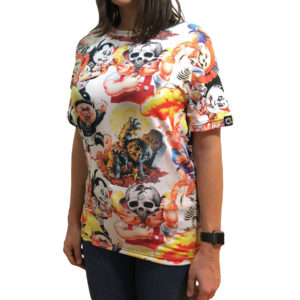 The second shirt is also a first for Creep Co. The Garbage Pail Kids Pattern Print Shirt is a dye sublimated, front and back allover print, on spun polyester, unisex shirt. This is the first time Creepy has used this method on a shirt. The shirt features the characters Bony Tony, Dead Ted, Eerie Eric, Nasty Nick, Bony Joanie, and Adam Bomb. One word of warning from the company, “The pattern print shirt runs small: customers are advised to read the product description carefully. These are stretchy and comfy for sure, but depending on how you like your shirts to fit, you may want to order a size up.” The company also warns this shirt will be available in limited quantities. The shirt is available is S-4XL for $34.99.