Gross Card Con has wrapped up, and the event left collectors and artists both overjoyed with the results. The show took place within the larger Vegas Toy Con at the Circus Circus hotel in Las Vegas this past weekend. The second Garbage Pail Kids inspired show drew a record 16 current and former Topps GPK/Wacky artists. This was more then the first Vegas show, GPK-Con, held in the summer of 2016. Collectors and artists came from around the country, and even Europe to attend the event. Here are the highlights from the weekend. 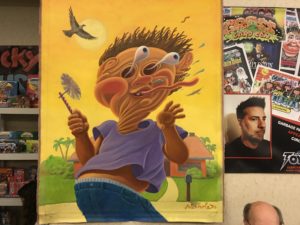 The highlight of the show was the amount of artists who attended the con. Former original series artists Tom Bunk and James Warhola were both in attendance. This was the first Vegas Con for Warhola, and the second for Bunk. Both were selling original artwork and prints, as well as signing autographs for collectors. Warhola had on display one of his popular large GPK paintings he’s done. Current GPK artists, Joe Simko, Brent Engstrom, David Gross, Layron DeJarnette, Smokin’ Joe McWilliams, and Michael Barnard were all in attendance. They all brought various prints, original artwork, and even their own card products to the show to sell. David Gross debuted his second Rejected GPK Concepts book at the show, a popular item. Former Topps artists Jeff Zapata and Mark Pingitore were also on hand. Pingitore debuted his Nintendopes Series 1 set at the show. GPK sketch artists Chad Scheres, Jon Gregory, and Chenduz were also on hand selling their own products and even doing sketches at the show for collectors. Chenduz came to the show all the way from the Netherlands for his first GPK con in the US. Finally, Wacky Packages collectors also had plenty to choose from. Not only was Smoking Joe selling Wacky art, but artist Joe Grossberg was also on hand offering his Wacky inspired toys and art. 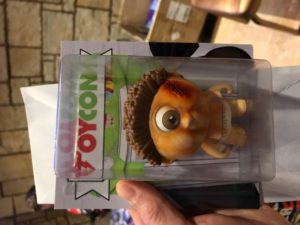 Once again GPK Super VIPs had many extras available to them at the show. While there was no exclusive artist dinner this time around, Super VIPs were treated to dinner Thursday night. They also were given a few goodies. They all were given a custom GPK Funko character. Each Super VIP received a different GPK Mystery Mini figure that had been enhanced. They also received a custom black & white sketch, and a copy of the show exclusive card set. Super VIPs and regular VIPs also could attend the show dinners on Friday and Saturday night. This was a chance for the VIPs to eat with and chat with the artists. While the weekend dinners were attended by all Toy Con VIPs, its interesting to note that 25%-30% of the attendees were GPK artists and collectors. 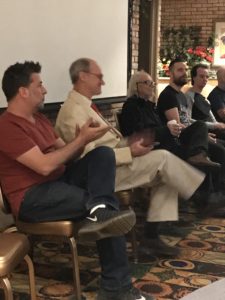 As a wonderful last second addition to the show, 8 artists held a Q&A session Saturday afternoon for GPK collectors. Warhola, Bunk, Zapata, Simko, Engstrom, Gross, DeJarnette, and McWilliams were all in attendance with Zapata leading the discussion. Approximately 75 GPK collectors were in hand as Bunk and Warhola both talked about their artistic influences growing up. They shared stories about their time at Topps, and the beginning of their involvement with GPKs. The entire panel answered questions on their art influences, digital vs. painting, and even a question regarding the grossness of GPKs. Engstrom even shared there is one final painting that has a real bug squashed into the painting! 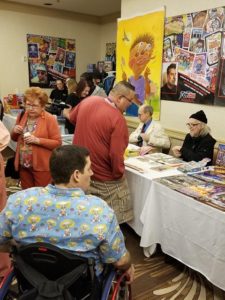 The second Vegas GCC had a different vibe than the first show for a number of reasons. The layout of GCC was completely different this time around. This time all the artists were located in one room at the show. They were also right in the middle of the show, instead of off in a separate corner. This change was an overwhelming success in the eyes of the artists. Artists were close enough this year to visit with each other, something that was tough during the first show. Being in the middle of the show, as well as the flow of the room setup, seemed to make the GCC artists more accessible to the general attendees at the show. This brought more foot traffic past their booths compared to the first show. I spoke to multiple artists who were really pleased with how they did at the show. More than one artist told me they made more money the first day of this year’s show than the entire first show. The entire show seemed very successful for most of the artists.

The artists weren’t the only group satisfied with the show. Collectors had a great time at the 2016 GPK-Con. That was the first chance many of them got to meet not only the artists, but collectors they’ve been interacting with for years. This year’s GCC had a different feeling at the show. I heard the word, “family”, multiple times throughout the show from not only collectors but artists alike. Of course there were new artists and collectors in attendance. This time however, collectors were coming back together. Artists, many who had met for the first time face to face in 2016, were now also seeing familiar faces again. Throughout the weekend GPK collectors and artists had a blast trading, busting boxes, socializing with each other, and just hanging out enjoying the company of others who share the same interests. GCC was like 150 of your closest friends getting together for the weekend.

I spoke with Super Toy Con Executive Producer, Andy Goodman, to get his thoughts on the show. On weather Super Toy Con/Gross Card Con was a success Andy shared, “The show was a huge success, as was our mini GPK meet. Gross Card Con brought out more collectors and more artists then the last go round in 2016. It was great to see the artists and collectors on the same grounded level, talking, sharing feedback and just sitting down for a bit of social interaction. Hopefully, someday Topps will see the engagement this type of event brings to the community of their collectors and will support the gathering in some fashion.” I asked Andy if they had plans to continue to offer GCC in the future. “I am sure we have not seen the last of a gathering. Weather we move the show to a different venue in Las Vegas or state is yet to be determined, but we will continue to bring the collectors together as we can. Also, don’t forget to block out the first weekend of August on your calendar, as there will be a few artists attending the east coast Central Pennsylvania Collectors Con in Harrisburg, Pa. More info coming soon!”