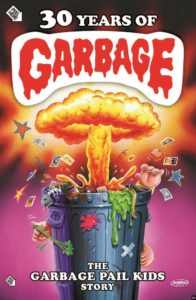 In what started over 4 years ago as an idea has now seen itself through the whole project. From the first Kickstarter, to Indiegogo, to the completion and debut of the film, to finally distribution, the folks behind 30 Years of Garbage have truly met the high standards of GPK collectors. Directors Joe Simko, Jeff Zapata, and June Gonzales set out to create a love letter to GPK collectors and have succeeded is just about every way. Here’s one last update on how the film is doing during distribution.

After being picked up by independent movie distributor Indican, the film debuted the weekend of 8/11/17, and continued in theaters until 11/16/17. The movie was offered in a very limited run, never appearing in more than two theaters in one week. According to Box Office Mojo the movie grossed a total of $26,804 during its release. During its opening weekend, 30 Years finished as the #76 movie based on gross earnings. How does the movie rank all time? Box Office Mojo has it as the 12,575 highest grossing movie, and the 1,027 highest grossing documentary of all time.

The Indican version of the movie has been available in a number of online streaming services for a few months now. Indican has also promised a DVD release of the movie a few times now, but with mixed results. While DVD sellers like Amazon, Target, and Indican itself have yet to offer the DVD for sale, it has popped up in a few places. eBay has had a number of copies for sale from a handful of sellers. Familyvideo.com also offered a limited number of copies via their website. In a small bit of good news for collectors, Directors Joe Simko and Jeff Zapata will have a small number of DVDs for sale at the upcoming Gross Card Con in Las Vegas. Hopefully, Indican will have a wider DVD release so everyone can get their hands on a copy.

The film has garnered a number of positive reviews from various online independent movie, and horror fan sites. Feedback has been almost universally positive from collectors as a whole. I asked Director Joe Simko to share his feelings on the entire journey now that he’s been through the whole process. He told GPKNews, “Honestly, Jeff, June and I could write a book on it. Of course we are so happy with the final product and how all the interviews we wanted to get, accepted our offer to participate in this great 1980s collective experience we call Garbage Pail Kids. We felt we were able to get a proper piece of this trading card history told through our film. It was a long journey, starting in late 2013 and releasing in summer of 2016. Well worth the time spent trash pickin’ away till it was done. We just hope people enjoy it as well.”

Joe, Jeff, and June should be proud they’ve created something collectors will fondly watch for years to come.