It appears two online skateboard companies began offering the tape this weekend on their websites, only for the listings to sell out quickly, and disappear. However, online retailer The Dark Slide, shows a listing for the tape with a “Coming Soon” label. The tape appears to retail for $11.99 per character. (Update: Price is now higher at $14.95. If buying from The Dark Slide you can use discount code GPK10off until 11/1.) The NFS Inc. B2B site also has pictures of the grip tape with the SKU #. I’ve reached out to the manufacture for more information, I’ll update this post with anything I find out. Keep your eyes open online and in skateboard shops around the country if you are interested in adding this to you collection.

Update: The Mob-Grip Brand Manager reaches out to GPK News to confirm that this is indeed an officially licensed product. The GPK themed grip tape officially launches on 10/23 in skate stores around the country. 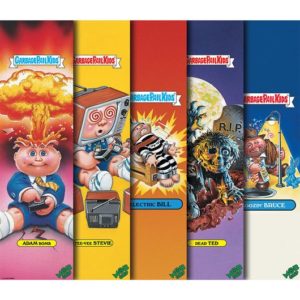