This is Part 2 of a two part series on the production of 2017S2 GPK Battle of the Bands. If you missed Part 1 you can go here to catch up. 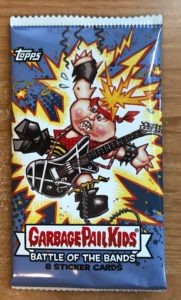 In the first post we looked at how many packs/boxes/cases were produced of 2017S2 Garbage Pail Kids Battle of the Bands. Here’s a review of what we came up with. 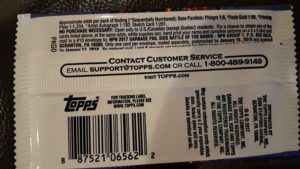 Still there are some things we just can’t determine. Topps has made it tough on us in recent releases. They no longer share a lot of information on the sell sheets for insertion numbers. This means we can not figure out each different retail pack type. Therefore, there are many retail items that we are unable to determine the production on. For example, the Yellow Phlegm borders. Since there is no way to break out the number of gravity feed packs from the other retail packs, we can not determine how many Phlegm borders were made. This also true for the various retail bonus sets; Classic Rock (Jumbo Insert Set), Gross Bears, and Bathroom Buddies. However, with production being slightly down compared to Adam-Geddon, you should see similar numbers of those this series. The lack of retail breakdown also means we can not determine how many Loaded Sketches or Panoramic Sketches were inserted into packs.

How do these numbers compare to the previous set, Adam-Geddon? Since there was 5,000 more Collector packs this time the total amount of Bruised parallels is higher. Conversely, with retail being down slightly the number of Puke parallels dropped just a bit. Finally, the Collector only bonus insert set of Concert Posters & Album Covers is also up due to the additional Collector pack production.

One thing I always find interesting is to determine what pack types the printing plates and artist autographs are hiding? Retail always has the majority of the plates because over 80% of the production is retail. We know Topps inserted 360 plates into the production, so here is the breakdown of how many can be found in each pack type. 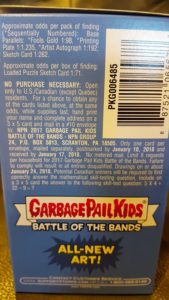 A couple of interesting things to point on on the Plate and Autograph distribution. We can also use this number to corroborate  our total pack numbers. Using our pack numbers with the odds comes out to 358 total plates inserted, thats really close to the 360 we know they put in packs. Using the pack numbers with Autograph odds we get a total of 2,297. We know there are 2,250 inserted into packs. Again pretty darn close. This is another reason why I’m confident in the total pack numbers. The other interesting thing I noticed is even though Collector production is up, the same number of plates and autos are in Collector packs as Adam-Geddon. This explains why the odds are a little bit harder than the last series for those two card types.

The number of sketches is up compared to the last series. The reason for this could be the large increase in sketch artists compared to Adam-Geddon. So far there are 49 confirmed sketch artists for Battle of the Bands. Therefore, the odds are a little easier this time around for pulling a sketch card.

The production numbers of Battle of the Bands show interest in Garbage Pail Kids remains consistent throughout 2017. How the next set, We Hate the 80’s, turns out will be interesting.

While that’s a ton, its down just slightly compared to Adam-Geddon. Time to get your groove on, and pick up a set of 2017S2 GPK Battle of the Bands!

This is Part 2 of a two part series on the production of 2017 GPK Adam-Geddon. If you missed Part 1 you can go here to catch up.

One Reply to “How Many 2017S2 GPK Battle of the Bands Cards Were Produced? Part 2”