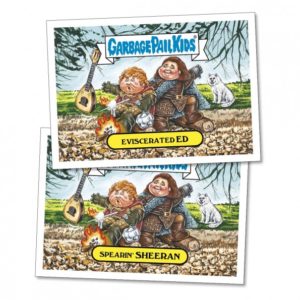 For the first time in months, Topps decided to put out back to back sets. Both sets were themed based on various popular music artists. Just like the ratings for the MTV Video Awards show, GPK collectors were lukewarm to the online set. Today Topps revealed the print run for Garbage Pail Kids 2017 Emtpy-V Awards online set. Sales for this set were a small fraction of the previous week’s Best of the Fest set. All cards in the set finished in the 90’s for total sales. Once again Topps revealed sales for the complete sets sold at 92. Those sales show that 4 of the 6 cards were not purchased individually, as they also finished with 92. Turns out this is the biggest difference from the Best of the Fest set, as those cards all had solid individual sales. Here is how the final totals came out.