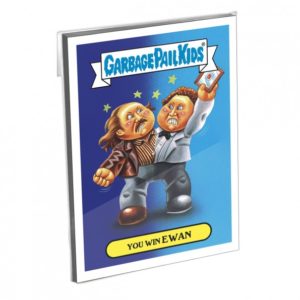 After taking a couple of weeks off, Topps is back with another awards set Today Topps launched Garbage Pail Kids 2017 Prime Slime Awards online set. This 12 card set consists of 6 new cards available in a/b versions. The set parodies popular TV shows that are up for Emmy awards at this weekend’s show. Brent Engstrom did the art for all the cards in the set. The set is only sold as a 12 card set for $39.99. A 3 set bundle is also available for $109.99. Unlike the last couple of sets where each pair of cards was also sold separately. This also marks a higher price point that the previous music sets offered. Shipping is free in the US via the SmartPost option, while international shipping is $10. The cards will be available on topps.com for 7 days. Topps will reveal the print run at the end of the sale. Here is a checklist and pictures of the cards.