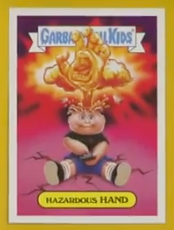 Last May skateboard resellers begin taking pre-orders for Garbage Pail Kids themed decks made by Santa Cruz Skateboards. Santa Cruz’s license with Topps doesn’t stop at boards, they are also offering GPK themed t-shirts. This week on their website, Santa Cruz released some details on these blind bag decks.  In the video posted below, Santa Cruz Brand Manager, Andrew Cannon, opened up five of these blind bags and revealed what could be found inside. As released earlier collectors will be able to find 9 different types of skateboard decks all varying in rarity. The seven most common decks feature Adam Bomb, or variations like Hazardous Hand and Radioactive Rob.

There are also 40 Background Boards. These are also 1of1’s that feature the classic Adam Bomb character but the backgrounds are all different.

In addition to the decks, collectors will also get an exclusive GPK card of Hazardous Hand, as well as a Heaving Hand sticker. The artwork for both the card and sticker was done by Santa Cruz artist “Pitchgrim” Cody Melick.

Santa Cruz has not revealed what the print run or odds of the various decks are. The GPK themed decks and t-shirts are set to be released from retailers on 10/9/17.