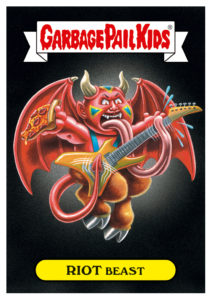 Riot Fest Chicago, the popular music festival started today and is set to run through this Sunday. As they announced earlier this week, Riot Fest Garbage Pail Kids licensed sets went on sale this morning when the show opened. The 10 card set features brand new artwork from Engstrom, Simko, and Gross. This set is a little different than most, as Riot Fest does this set under a license deal with Topps. Riot Fest and the bands must approve the artwork in advance and are in charge of distribution.

The set is a little larger than last year’s set, and with that comes a price increase. The sets are being sold for $29.99 each at the merchandise booth at the show. This is the only place you are able to buy the set directly. If you aren’t able to attend the show there is always eBay. There are already plenty of sets listed on eBay, and just like last year it will cost you quite a bit more. Merchants told customers there were 300 sets available on Friday for sale. Those easily sold in the first few hours of the show. Information on if more will be available Sat/Sun or the complete print run is not clear.

That’s not all Riot Fest has to offer. The artwork for card #1 in the set, Riot Beast, is also being offered as a t-shirt at the show. Thanks to GPK collector Edward TropicBlue for the info and picture of the shirt. This licensed shirt is available to concertgoers for $30 at the show. 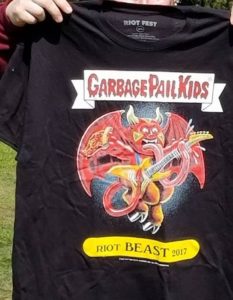