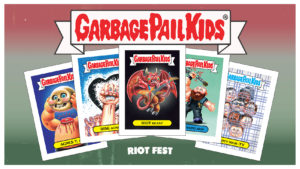 That’s right the very popular GPK set offered at last year’s Riot Fest Chicago show is back again for another year. Today on their blog the music festival announced a set for this year’s show. The 10 card set is based on various musical acts. The show takes place next weekend, Sept. 15-17 at Douglas Park in Chicago, IL. The show didn’t reveal much about the set, other than people interested in purchasing it should show up early as quantities will once again be very limited and are expected to sell out fast. No pricing or print run information has been revealed. Here is the checklist along with pictures of the cards.