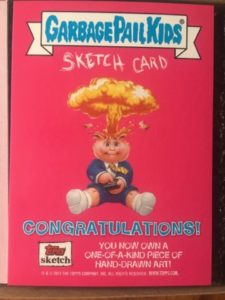 It appears the name of the mystery online GPK set Topps is working on will be called Garbage Pail Kids Classic. This at least according to the sketch card information sent to artists this week. The “Classic” name matches up with a similar set being worked on at the same time with the Wacky Packages brand, Old School 6. Here’s what we know about the set as of now.

What can we infer about the name, Garbage Pail Kids Classic? Will the set consist of classic characters, or new characters drawn in the old classic John Pound style? At the same time as this set, Topps is also working on Wacky Packages Old School 6. In fact sketch cards were sent at the same time for this project with the same deadline. The Wacky Packages Old School sets have historically been an ode to the hardcore collector. So the big question is will GPK Classic be a similar product for GPK collectors? While the size of the set is unknown, word is both Brent Engstrom and Joe Simko have completed the artwork already for the base cards. 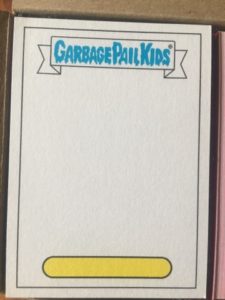 Release date is still a mystery. Wacky Packages Old School 6 is rumored to release in October. However, no information is available for a release of GPK Classic. With the release of the retail GPK set Battle of the Bands, October could shape up to be a very busy month for Garbage Pail Kids.