As we shared with you last week, Creepy Co. is set to offer a slew of new officially licensed Garbage Pail Kids merchandise. The company already offered a teaser recently by showing an Adam Bomb enamel pin that will be available. Here is everything else you can expect to be able to purchase later this week. 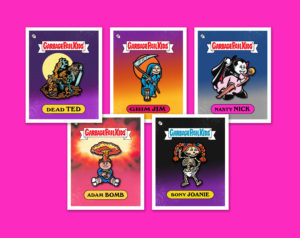 By offering pins for their own brand, as well as other brands, Creepy Co. has lots of experience in the enamel pin business. The first wave of GPK merchandise will include 5 pins featuring four OS 1 characters, and one OS 3 character. The pin checklist consists of; Nasty Nick, Dead Ted, Adam Bomb, Bony Joanie, and Grim Jim. All pins come attached on a card backing with the straight Garbage Pail Kids banner, Peel Here arrow, and Name Plate. Each enamel pin will be available for $11.99.

Next up will be the GPK Series 1 Button Pack by Creepy Co. The pack will feature six buttons attached to a card back with the Straight Garbage Pail Kids Banner and both the Topps and Creepy Co. logos. The buttons themselves only have character artwork along with the curved “GPK” banner that Topps has been using for licensed merchandise recently. The checklist features characters from OS 1, OS 3, and OS 4; Nasty Nick, Weird Wendy, Juicy Jessica, Frank N. Stein, Eerie Eric, and Bony Tony. The GPK Series 1 Button Pack will be available for $9.99. 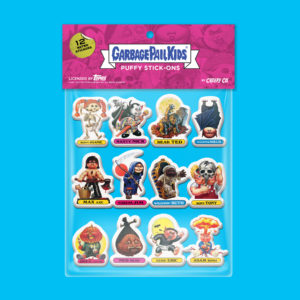 After seeing all this great merchandise, the question is what’s next? The company confirmed with GPKNews their license with Topps is long term. New GPK products are scheduled to come out quarterly. The company is also working on officially licensed retail products for later in 2018. Creepy Co. also confirmed to GPKNews that the first wave of GPK merchandise will be available on the Creepy Co. website store this Thursday, 9/7, at 7:00 PM Central time. The products will be in their warehouse and ready to ship that day, so get your credit cards ready!