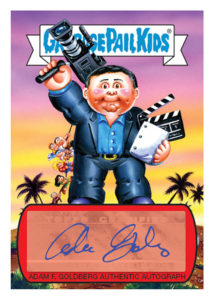 Blowout Buzz was first to reveal earlier today that 2018S1 Garbage Pail Kids We Hate the 80’s will include autos from the cast of The Goldbergs TV show. Creator Adam Goldberg previously was featured in the 30th anniversary set. Now a large part of the cast will be included with autos. Here is the list of autos you can expect to find.