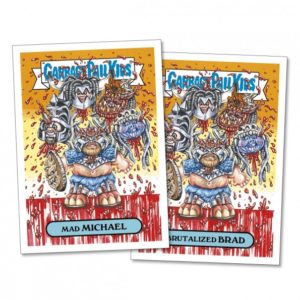 How much do GPK collectors like their bands? A little more than the 4th of July, but less than their favorite comic characters. Today Topps revealed the print run for Garbage Pail Kids Best of the Fest 2017 online set. The 18 card set featured 9 new cards available in a/b versions all based on the top music acts from summer concerts. In what probably shouldn’t be a surprise, it turns out GPK collectors like GWAR. The cards based on that band led the way in sales with 186 copies sold. The remaining cards all finished in the 140 range. In a break from tradition, Topps also appears to have revealed the number of complete sets sold with 116. Sales remain consistent for the online offers despite the large breaks between sets. Here are how the final numbers ended up.