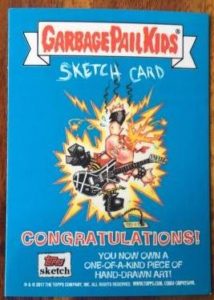 GPK artists began receiving their blank sketch cards in the mail this past weekend for the next two sets. The 48 artists who have accepted invites for either both or one of the next sets can now begin the long nights of sketching.

The sketch blanks for 2017 Series 2 Garbage Pail Kids Battle of the Bands features the Live Mike character from OS 2 on the back of the regular and panoramic sized sketches. The backs of the sketches are light blue, while the front of the regular sized sketch has a yellow name plate. The usual red banner returns to the fronts. 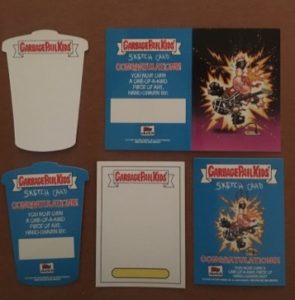 While not much is known about 2018 Series 1 Garbage Pail Kids, we have our first clue. The backs of the 2018S1 sketches feature the character Reuben Cube, card #277a, from OS 7. Rumors online have been the 2018S1 set will be 80’s themed. If that’s the case a character parodying a Rubik’s Cube certainly fits. The color on the backs is the same as the 2017S2 light blue. However one big change is to the banner. Instead of a white background with the red banner, it is a yellow background. The name plate on the regular sized sketch is pink for this series. 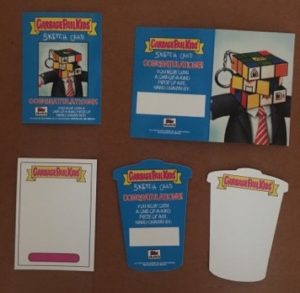 The rules around sketching look to have remained the same. Artists are not allowed to sketch cards featuring Stan Lee, Gene Simmons, the Hundreds set, Riot Fest set, and all Disney properties including Star Wars and Marvel. Sketch artists will have to get busy quickly as Dual Artist Panoramic are due back Aug. 1. Artists will have much more time to complete the other cards of both sets. 2017S2 GPK Battle of the bands is set to launch on 10/18/17, while 2018 S1 GPK will launch sometime in Jan. 2018. 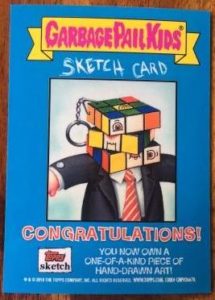