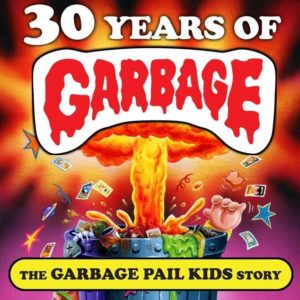 Just over a year after making its premier, the Garbage Pail Kids documentary 30 Years of Garbage has secured a distribution deal with Indican Pictures. The film, directed by GPK artists Joe Simko and Jeff Zapata, chronicles GPKs from their beginning. Included are interviews with all the original artists and Topps employees who started the brand. The distribution deal was officially announced on the 30 Years Twitter page earlier today.

Indican Pictures is a distributor who focuses on distributing independent movies through various avenues. Previously, the only way to see the film was to have been a backer of their Indigogo campaign. Over $41k was raised back in 2014 to help get the film made. Those who backed the project received the Director’s Cut of the movie on DVD. Now that Indican is handling distribution, there will be a wider release. Indican has not made any official announcements regarding how and where the film will be released. In speaking to the producers of the film, there will not be a theatrical release of the movie. However, online streaming is planned, along with the possibility of physical DVD/Blu-Ray copies of the movie. Indican has limited information on their website now as they begin to promote the film in their New Release section.

The version of the film that is being released will be slightly different than the Director’s Cut that was sent to backers. While the Director’s Cut came in at 2 hrs 12 mins, the new release will be 1 hr 54 mins. Additionally, due to licensing issues, a lot of music has been replaced. Instead the score of the entire movie will be done by Dr. Chud. Dr. Chud previously wrote songs for the Director’s Cut version.

Information about the distribution deal has slowly be finding its way into the public the last few weeks. After a small mention on Indican’s website regarding the film, they quietly started promoting it at last week’s San Diego Comic Con. Collectors could pick up a set of 3 promo cards for the film at Indican’s booth. Card P1 has the same card from of the movie’s title as previous promo cards. Cards P2 and P3 feature the same artwork used on the Simko and Zapata promo cards previously sent to backers. However, the banner their cards has been changed to “Director” instead of the previously used “Garbage”. Also, the backs of the cards now feature the Indican Pictures logo in addition to a release date of the film, 9/20/2017. Copies of the cards have surfaced the last few days on ebay. Indican produced and  distributed these cards, as they are handling promotion for the movie now. 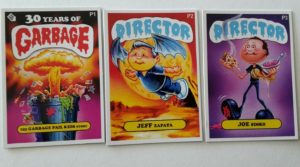 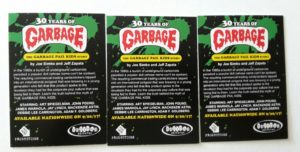 One Reply to “30 Years of Garbage Documentry Gets Distribution Deal”