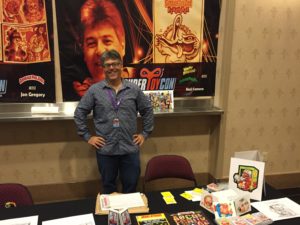 Garbage Pail Kids collectors have just started to get to know Neil Camera even though he’s been working on GPKs for years. Starting with Topps in 2002, Neil has mainly focused on the Wacky Packages brand, painting hundreds of Wacky’s over the years. What GPK collectors might not know is Neil has also had a hand in GPKs going back to the ANS sets. Neil has worked on insert cards, card backs, and been one of the primary sketch card artists for years. Finally in the 2016 Series 2 GPK Prime Slime set, Neil had his first main set base GPK card. He’s now a regular with cards in 2017 Series 1, online releases, and the soon to release 2017 Series 2 Battle of the Bands. Neil was kind enough to grant me this e-mail interview. We discuss his history with GPKs, his future GPK work, and the the fact that he might not be the best artist in his own house!

GPKNews – Thanks for taking the time to do the interview Neil! It was great meeting you and your daughter last year in Vegas at GPK-Con 1. GPK fans might not be as familiar with your work unless they are Wacky Packages collectors as well. How did you get your start with Topps and working on Wackys?

Neil Camera – The GPK Con was certainly a lot of fun, wasn’t it?! So, I started working for Topps in 2002. I had just finished a self-published set called “Pranky Products”, which were in a similar vein to Wacky Packages. Coincidentally, Topps was in the process of reviving Wacky Packages and on the recommendation of John Pound, I submitted some of my samples to Topps for consideration in the All New Series. Luckily, they liked what they saw!

GPKNews – Were you a Wacky Packages collector growing up? How about Garbage Pail Kids, what are your memories of those first GPK series in the mid-80’s?

NC – Oh yeah! Wacky Packages were the king of collectibles back in the 70’s! I had almost every sticker. I even took a bunch and ran them through my typewriter and added gags I thought would be funny. Not so funny now that I know what they’re worth! I was a bit older when GPK came out and not as avid a collector, although I found them pretty amusing! In fact, I remember buying an entire series 1-15 collection at a flea market. The funny part is that I could see the seller was having second thoughts and I later went back and told him to keep them. He obviously needed them more than me.

GPKNews – Your first involvement with Garbage Pail Kids wasn’t until ANS 7, when you worked on card backs. What led to the initial work on GPK with Topps?

NC – Jay Lynch. We had previously worked on a lot of Wacky Packages projects so the GPK thing was a good fit. My favorite was the GPK Activity cards. In one instance, we literally spent an entire weekend figuring out how to make one of the cards work correctly (the #10 Rainbow card). The other 9 were almost as crazy. 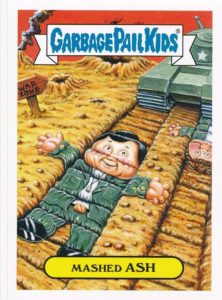 GPKNews – You continued to work on card backs, some insert sets, and even sketch cards through the next generation of GPK sets; Flashback, BNS, Yearly series. Finally, with 2016 Series 2 GPK Trashy TV we got your first base set card fronts. (The MASH one is one of my favorites from that set!) You did two for the Trashy TV set, and five I believe for the 2017 Series 1 GPK Adam-Geddon set. Do you enjoy painting GPKs? How is it similar or different from painting Wackys?

NC – I typically try to emulate the style of the original creators in my Topps work. It’s the old adage, “If it ain’t broke, don’t fix it”. So, in the case of Wacky Packages, Norm Saunders used very loose, but subtle brushstrokes (in gouache) and combined it with dramatic color and lighting, whereas with GPK, Pound’s style was equally dynamic but a bit more choreographed with a considerable amount of airbrush. Two very different styles, but both equally impressive and challenging.

GPKNews – You also have done numerous GPKs and Wackys for the on demand online exclusive sets. I know there are tight deadlines and turn around times for these cards. How has working on those been the past few months? How is it different working on those compared to the retail release cards?

NC – Aside from the crazy deadlines, there are certain aspects of the digital program that I really enjoy: Since we often only get one take on the finished art, I’ve learned to paint faster and looser. So, it keeps me on my toes and as long as I don’t stop and think about it too much, it usually works out well. Just don’t second guess the details.

GPKNews – You’ve also done GPK sketches going all the way back to the Flashback series. You have a lot of fans of your sketch card work. Your sketches, especially the returns, you do are gorgeous. Is this something you enjoy doing each release?

NC – Apart from the brand itself, I really enjoy the format. Having painted wall murals in my early career, I got tired of running up and down a ladder to check my work, and learned to appreciate the convenience of a small canvas! Nearly everything I paint these days is no larger than 8” x 10”.

GPKNews – Recently Topps announced the next retail GPK set, 2017 Series 2 GPK Battle of the Bands, do you know yet if you will be doing any card fronts for the next series? Are you still on board for sketches?

NC – Yes on both counts.

GPKNews – With WP 50th just being launched, what else is in store for the artwork of Neil Camera? Anything else you are working on?

NC – I’m always working on something. In fact, my biggest challenge these days is to learn to say “No” to a project and take some time off occasionally. Easier said than done, as most freelance artists can attest. With that said, there’s one project in particular that I’m especially eager about. It involves music and art, and should be released this Fall. But that’s all I can say about it now.

GPKNews – We had a chance to visit last year in Las Vegas at GPK-Con 1. From a collector’s perspective it was a great experience! I hear GPK-Con 2 is in the early planning stages for next Feb. What was the experience like for you? Do you attend a lot of cons around the country? Did you enjoy meeting the artists and GPK fans?

NC – Because of my work schedule, I actually attend very few shows, so going to Vegas and finally meeting some of the GPK fans was a real hoot! And of course, having so many of the GPK artists at one venue was probably a once-in-a-lifetime event, so I’d imagine the fans that attended were equally thrilled! Definitely keeping GPK-Con 2 on my radar.

NC – Great documentary! Fantastic content and very well crafted. Worthy of putting in a capsule and firing it into deep space for aliens to find someday and learn about our culture. Interestingly, I’ve had some discussions with Joe about the idea of doing a Wacky Packages 50th video, but I think we all realize, for better or worse, there isn’t nearly as much drama to that story!

GPKNews – You shared a great story with us when Jay Lynch passed a few weeks ago. He was so important to Topps especially in the early years. Do you have any other Jay Lynch stories you can share?

NC – Jay may qualify as the “World’s Most Interesting Man”, but most stories I have about him would take many pages to do proper justice, so I won’t try here. Someday, I hope to gather all of my recollections in a book and release it as a tribute.

GPKNews – You aren’t the only artist in the Camera family! Your daughter, Halsey, is a fine artist in her own right. We need Dual Artist Camera/Camera sketch cards in the next series! What are the chances we get to see the first 2nd generation GPK artist?

NC – Yeah, it’s getting pretty competitive in the Camera household! If she keeps it up, I may be out of a job! Seriously, she brings so much depth and character to her art, that I find myself constantly looking over her shoulder and learning from her. She’s already started an animation gig with a Silicon Valley software firm. I couldn’t be prouder.

NC – This may be your toughest question yet. I guess from an aesthetic standpoint, I’d have to say it’s tough to beat “Adam”, but I really enjoy titles like “Drippy Dan” and “Meltin’ Milton” and “Bony Tony” for their really simple gags and big punchlines.