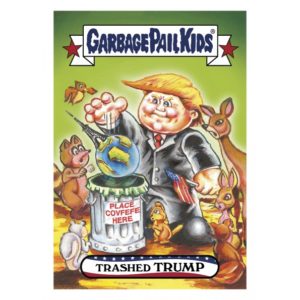 After an abbreviated week of online offers, Topps waited until the end of the week to reveal print run information. Today Tops revealed the print run for Garbage Pail Kids Trumpocracy 2017 #30, and GPK Network Spews #75/#77. Results for the sales were mixed. One GPK finished in double digits, while two others sold in the mid 100’s. Leading the way was the return of artist Jeff Zapata, whose Trumpocracy sold 160 copies. One interesting note it appears Wacky Packages collectors are returning to purchasing the online cards. The last couple of weeks Topps has released more Wacky’s than GPKs, and sales are much higher for the Wacky’s recently. It remains to be seen of those trends will continue. Here is how the GPK cards from this week week ended in sales.