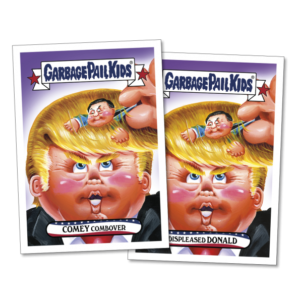 Topps decided last week to change things up. There was only one day of Trumpocracy/Network Spews cards, and of that only one GPK card was offered. Topps also decided to return to offering the larger online sets, with a set completely based on former FBI director Comey. After a delay, Topps today finally announced the print run for Garbage Pail Kids A Comedy of Comey online set, and Network Spews card #80. All the GPK cards finished right around the same amounts, in the low 100’s. That is right around where cards have been selling lately. It looks like Topps may be de-empathizing the daily cards. Here are how the final numbers for last week’s cards came out.