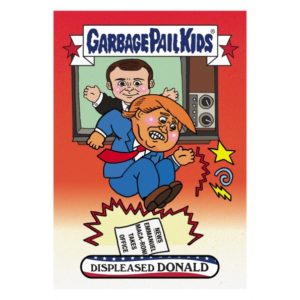 Earlier this evening Topps revealed the print run for the first online offering of the week, Garbage Pail Kids Trumpocracy 2017 cards #11-#12. Sales for the week are starting off right where they ended last week. Once again a new record low was set for a GPK online exclusive. Card #11 only sold 108 copies, besting the previous record by one. The other Trump themed GPK and Wacky sold just a few copies more. Sales have fallen dramatically over the last two weeks. Many collectors are curious if the record will be broken again with today’s cards. One card has received much condemnation today on GPK collectors sites and groups. It will be interesting to see how the negative reaction will translate to sales. Here are how the first batch of online cards finished.