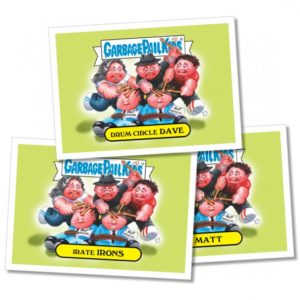 After three weeks of sales, did music fans show up for this year’s Rock and Roll HOF set? Today Topps revealed the print run for 2017 Garbage Pail Kids Rock and Roll Hall of Lame set. This 17 cards online exclusive set was a mix of GPK and Wacky Packages. The set was based off of this year’s Rock & Roll Hall of Fame ceremony. This set marked the first time a a/b/c online version of a GPK card was offered. After three weeks sales of the set was in the low 200’s for all the cards. Sales for this set did much better than the previous awards set, the Not-Scars. The Wacky Packages cards led the way in sales, with their GPK counterparts not far behind. Here is how the final sales numbers ended up.