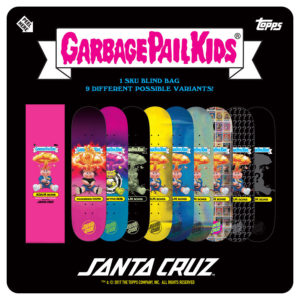 Topps licensing people have been fast at work in recent weeks it seems. Thanks to GPK collector Jason Tobias who was first to point out the latest officially license GPK merchandise. Santa Cruz, yes the skateboard company, has announced licensed GPK themed skateboard decks. These full sized decks will be offered as a “blind bag” purchase. There will be nine different variations on the artwork and deck backgrounds available. Each blind bag will include one random skateboard deck, Santa Cruz stickers, and an exclusive Adam Bomb trading card. The different variations all will appear at different rarities, including different 1 of 1 variants being offered. Release date for these skateboards is set for 10/9/17. One company, Old Skull Skateboards, already has these available for pre-order at $59.95 each. Santa Cruz also says there will sell GPK themed t-shits, including Adam Bomb. Here is a rundown of the different variants available, along with their rarity.