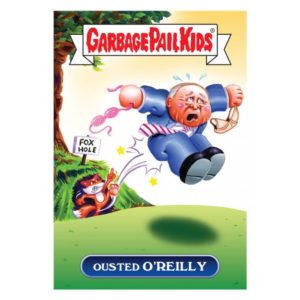 After three straight days of online releases, sales remain constant. Today Topps revealed the print run for Garbage Pail Kids – The First 100 Days #153-#154, and GPK Network Spews #37-#39. Topps continued the focus on Wacky Packages this week. Of the 15 cards released, only four were GPK. Sales numbers haven’t responded, and Thursday’s results are much the same. All cards finished under 200 in sales, except for the Alternate Facts Wacky card. Both GPK cards were just behind their Wacky counterparts. With just over one week left in President Trump’s first 100 days, collectors are looking forward to see how Topps changes up the online offerings. Until then expect a full lineup of cards next week leading up to day 100. Here are the final numbers for Thursday’s cards.