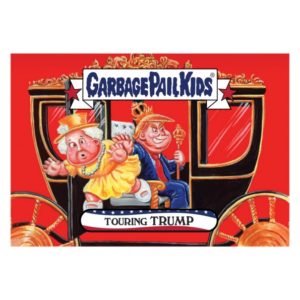 Over the past few weeks Topps has made a move to focus more on Wacky Packages over GPK in the online releases, but are customers buying? Today Topps revealed the print run for Garbage Pail Kids Trumpocracy – The First 100 Days cards #148-#152, and GPK Network Spews #33-36. These results are for both Tues. and Wed. online releases, where seven of the nine cards were Wacky Packages. It would appear focusing on Wacky Packages isn’t working, as new lows in sales were set for Wacky cards. Only one card for this sale broke 200 in sales, with a couple of the Network Spews Wackys down in the 160’s for sales. Wacky cards to date had not seen sales this low. Both the GPK cards were right in line with their Wacky counterparts. Today is day 90 of President Trump’s stay in office, the end appears to be near for at least one of these online sets. Expect Topps to hit it hard in the final 10 days. Here are the final numbers.