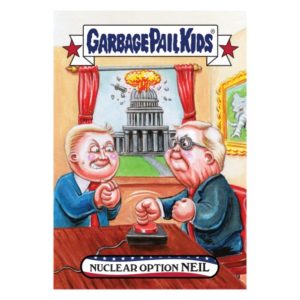 It took Topps a while, but they’ve finally caught up on print runs for the Trumpocracy cards. Today Topps revealed the print run for Garbage Pail Kids Trumpocracy – The First 100 Days cards #144-#147, and GPK Network Spews #31-#32. These were the cards on sale last Wed. and Thur. on topps.com. The GPK cards, only two of them, came in right around average for recent sales. The Wackys saw a little rebound, with 3 of the 4 well into the 200’s in sales. This week is bound to bring additional entries in the series. There is less than two weeks remaining in President Trump’s first 100 days in office. Here are how the final numbers came out.