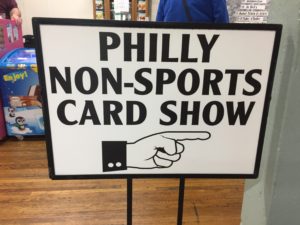 This past weekend was the semiannual Philly Non-Sport Show. The show is one of the largest non-sport card focused shows in the country. The spring show was themed Garbage Pail Kids/Wacky Packages. The GPKnews.com East Coast Bureau, (AKA Steve Sodergren & Erica Fox), filed this report on the show.

This past weekend saw the 66th Philly Non-Sport Show held at the Merchants Square Mall in Allentown, Pa. Collectors flocked from all over for the oldest show of it’s kind in the country. This particular show held even more interest for Garbage Pail Kids and Wacky Packages collectors, as it had a show exclusive and Topps licensed nine card GPK and Wacky Packages set. Vendors from across the country were on hand with a wide variety of all things non-sports cards and related merchandise selling boxes, sets, singles and even wrappers for a myriad of card brands. Among these vendors were six Topps official artists all located in what was referred to as “The Artist’s Corner.” Layron DeJarnette, Jon Gregory, Smokin’ Joe McWilliams, Chad Scheres, Joe Simko and Jeff Zapata were all on hand selling sketch cards and their own personal non-Topps projects, as well as taking commissions, signing autographs and chatting with fans. One artist billed to be there, Neil Camera, could not attend due to weather problems interrupting travel. Located near “The Artist’s Corner” was vendor and well known eBay seller Clint Coleman (9046clint) who brought his GPK and Wacky Warehouse to the show. Also seen floating around the artists area was GPK historian “Barren” Aaron Booton, who’s site gpkworld.com has helped many collectors over the years. The show’s promoter and organizer Roxanne Toser (Roxanne Toser Enterpriss) and family were on hand keeping the show running smoothly, as well as selling all things Wacky and GPK at their very own stand. 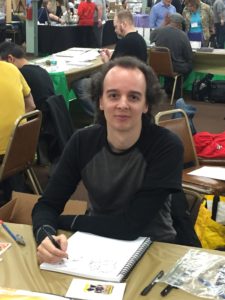 Rarely seen items were on display for purchase. Those included the extremely rare GPK pencils valued at $25 a piece, also Imperial toys in the packaging, and not marred by price tags and unused still in the box Halloween costumes. Attendees could find deals throughout the show, including not mint but still nice OS 1 singles starting at $2 each,  U.K. minis ranging from 25¢ to $1 each depending on condition, and $1 mint giant Series 1 and 2 cards. Everywhere you looked collectors could be seen rifling through cards with their needs lists in hand making deals to help complete their various card projects. Attendees also were able to purchase the exclusive GPK and Wacky Packages card set for $25. Only 300 were printed and less than that were available for sale. Some were used by the artists who were selling signed copies of their own cards, some sets were used as prizes, and some were also sent back to Topps. The set was limited to two per person and arm bands were marked to ensure fairness that the limit was enforced. Saturday’s allotment, which according to Harris Toser of Non-Sport Update and Beckett Media, was the bulk of the run and were sold out by somewhere between 12:00 and 1:00. A sign was put on the table announcing that more would be available Sunday. All attendees were given a free card set they could choose from a table at the entrance as well as show exclusive promo and event cards, which included an in memoriam card for Topps veteran and GPK and WP legend Jay Lynch who passed away on March 5. 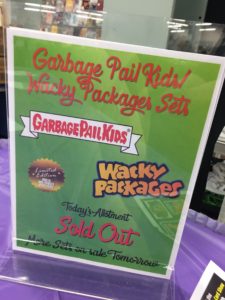 Day one finished off with a sold out dinner hosted by the Tosers which took place at the show’s host hotel, Hilton Garden Inn. The dinner was in honor of Jay Lynch and the late Frank Reighter who started the Philly Non-Sports Card Show back in 1984. Frank died on February 3 of this year. Upon entering the dinner, guests were given a dinner exclusive card package which included a Wacky Packages 50th Anniversary card done by George Wright and a metal version of the Jay Lynch memoriam card. Assigned seating was given and each table had an artist seated there. This seating arrangement lent itself well to collectors of both brands to talk with the artists and each other on a more personal level. The atmosphere was very welcoming as Roxanne’s attention to detail created a well organized evening that ensured not only the comfort of the diners, but also kept it structured and moving along at a good pace.  The dinner opened with each guest introducing themselves. Dinner attendees included all six show attending GPK and WP artists as well as artist George Wright who created the artwork for the dinner exclusive card, Melty Misfits creator Buff Monster, and former Topps Vault manager and Beckett’s Price Guide editor Mike Jasperson. Also in attendance were hardcore Wacky and GPK collectors who are well known in their respective communities including Aaron Booton and Clint Coleman. The dinner featured a speech given by Jeff Zapata honoring his friend, mentor and former roommate Jay Lynch. Jeff opened the room up to anyone who wanted to share a story or reflect on the life of Jay. Others who spoke included Mike Japerson, Smokin’ Joe, Roxanne and her husband Marlin. The night ended with a prize drawing in which Roxanne herself and attendees pulled the winning names out of an original GPK garbage can. Prizes included a framed uncut sheet of a past event promo card created by Jay, a large metal card of the exclusive dinner card, a Jay Lynch memorial service poster, IDW GPK Puketacular comic books, a box of GPK Prime Slime Trashy TV, a 30 Years of Garbage DVD, and the table centerpieces which were made by Roxanne herself. Capping the evening was a very special surprise gift for all attending as each table got a metal card of the artist that they had dinner with. The admission price for this evening was well worth the night of fun and surprises that Roxanne and family provided. 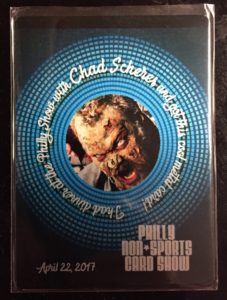 Every show features a card talk session on Sunday morning. The 66th talk featured a Garbage Pail Kids and Wacky Packages panel and included Layron DeJarnette, Smokin’ Joe McWilliams, Chad Scheres, Joe Simko and Jeff Zapata. The talk was a Q & A format where anyone in attendance could ask the artists a question. The panel opened with each artist introducing themselves, where they live and some of their current and past personal and professional experiences with GPK and WP. After the intro it was open for anyone to ask a question. There were six questions in total asked. The first was directed to Smokin’ Joe regarding his experience growing up locating and collecting Wacky Packages. The second question was asked of Chad Scheres regarding any future plans to do a Rat Finks or Hot Rod inspired set. Questions three and four centered on Topps’ online card releases and the artists gave their thoughts on the pros and cons of the current card trend and collecting experience. Question five asked for each artist to share a rejected concept that they submitted and really liked, but for whatever reason never made it. Question six asked why the artists are not more prominently credited on their cards. As with the dinner there was a promo card handed out. This promo was non-GPK and Wacky themed. Also as with the dinner, there was a prize drawing in which 18 various non-sport cards and merchandise prizes were given including a box of 50th Anniversary Wacky Packages and a box of GPK PSTT both courtesy of Topps. The card talk lasted approximately an hour and ended around 9:15 allowing plenty of time to make the 10:00am opening of the show.

Day two of the show included a day specific promo card done by Tom Bunk. The remaining exclusive card sets were sold, again only two per customer and were not opened to vendor purchase until around 1:00. As with Saturday the set sold out. The show was a little less crowded as the previous day,  but there were still plenty of attendees. Unlike Saturday, Sunday had a prize drawing for varied non-sport goodies. One prize winner was Allender’s House of Checklist creator Jeff Allender. Artists Jason Brower and Fred Wheaton were also attendees at the show and Fred attended the card talk as well. 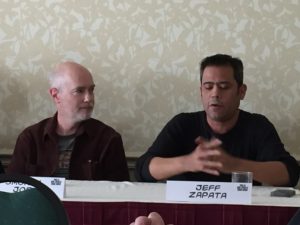 Some upcoming releases were mentioned during the weekend which included a new themed GPK set slated for release in the fall according to Joe Simko. Details on the theme, size or set format were not given. Smokin’ Joe said he finally has had some of his GPK gags approved and will be part of the GPK artist lineup. Jeff Zapata made mention of a parody card set that he said he is currently trying to produce, but gave no further details on it. He also made mention of possibly working on his memoirs this year. Independent card company Sidekick Labs was on hand at the show and they handed out a promo card for a upcoming Spanish version of Melty Misfits 2 and it was also mentioned that Buff Monster was working on Melty Misfits 3.

The next Philly Non-Sports Card Show will be held on October 21-22 at Merchants Square Mall.

Thanks to Steve and Erica for their report on the show! Look later this week to GPKnews.com for transcripts of the card talk and Jay Lynch tributes. Below are the pictures they took of all the festivities!