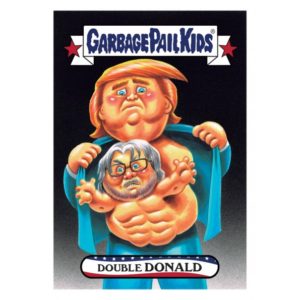 Topps was delayed a bit in releasing online print run numbers for this week’s cards. The numbers aren’t good for the first two political releases of the week. Today Topps revealed the print run for Garbage Pail Kids Trumpocracy – The First 100 Days cards #64-#76, and Network Spews card #18. Collectors did not show up to purchase this weeks cards. New record lows were set within the Trumpocracy set, as three cards broke the previous low mark. The new low is now 140 sold, with cards #71 & #73 hitting that mark. For the most part the GPK cards finished in the 140-160 range over the last two days. The Wackys were also down quite a bit, especially Wednesday’s cards. Those Wackys ended just over the 200 mark. With the third day of huge offerings from Topps today, it will be interesting to see if new lows are set once again. Here are the final print run numbers for the cards offered Tuesday/Wednesday.