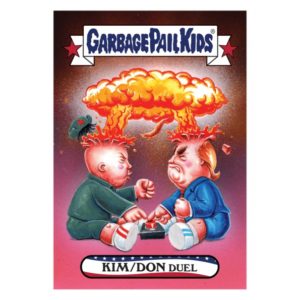 Topps third consecutive online release this week rebounded in sales compared to the previous day. Today Topps revealed the print run for Garbage Pail Kids Trumpocracy – The First 100 Days cards #131-#136 & GPK Network spews #24-#25. Despite being heavy on the Wacky Packages, the GPK cards performed well in sales, led by #131 doing 224 in sales. That actually beat a couple of the Wacky cards. All cards including Wacky’s were up 40-80 in sales numbers compared to the record lows from Wednesday. Day #100 of Trump’s presidency is April 29th, so expect many more releases to come. Here are how Thursday’s cards ended up.