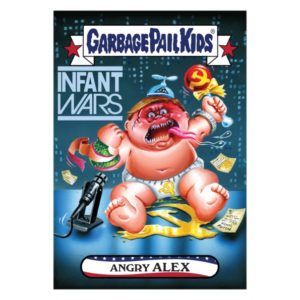 Topps second release of the week failed to live up to customer expectations. Today Topps revealed the print run for Garbage Pail Kids – The First 100 Days cards #129-#130 & GPK Network Spews #22-#23. Bad news all around for sales, as a new record lows were set. Card #129 in the Trumpocracy set became the lowest selling online GPK to date at 138 copies sold. The other Trump card only faired a little better at 141. The Network Spews card did sell a handful more copies, however the Wacky Packages Spews card set a new record low for Wacky cards at 183 copies sold. It will be interesting to see the sales from Thursday’s larger release. Here are the final numbers.