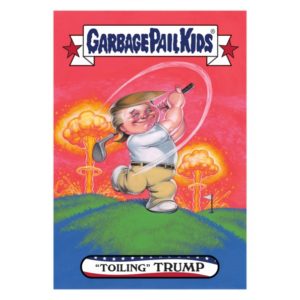 The third Trumpocracy release of the week did not sell well for Topps, and set records for new lows. Today Topps released the print run for Garbage Pail Kids Trumpocracy – The First 100 Days cards #112-#116. The results showed one high, and many lows for Topps. First the good news, the return of artist John Cebollero led to the card painted by him (#114) to a high of 209 copies sold. That was the highest selling card of the day, and for the first time in a long time actually beat the Wacky Packages card in sales. However the rest of the news was all bad for Topps. A new record low for an individual card was set by both card #112 and #113, both selling 139 copies. The Wacky card was also very low as it barely cleared the 200 mark. With Topps doing a forth straight day of sales on Friday, will sales continue to fall? Here are how Thursdays cards ended up.