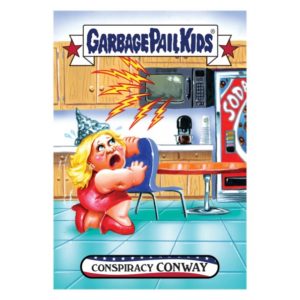 The second online release of the week saw sales slip back to recent levels. Today Topps revealed the print run for Garbage Pail Kids Trumpocracy – The First 100 Days cards #106-#111. After a strong day of sales from Tuesday’s release, sales for Wednesday’s release returned to the levels previous seen the past few weeks. The GPK cards all did in the mid-100’s, while the Wacky Packages cards were in the early to mid 200’s. Will the addition of artists John Cebollero and Tom Bunk to Thursday’s releases help the sales numbers? Here’s how Wednesday’s numbers ended up.