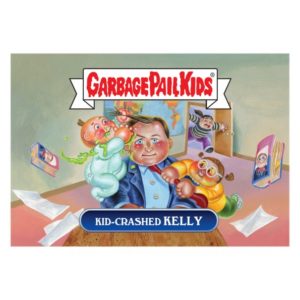 The first online exclusive release of the week brought a spike in sales across the board. Today Topps revealed the print run for Garbage Pail Kids Trumpocracy – The First 100 Days cards #101-#105 & GPK Network Spews #20. Both GPK and Wackys saw a resurgence in sales with Tuesday’s release. The GPK Trumpocracy cards finished in the high 100’s, while the GPK Network Spews card topped them at 213 copies sold. The Wacky Packages were in the high 200’s, and even one just crossed the 300 mark in sales. These numbers represent a 50-60 card increase over what the cards have been selling for. For whatever reason these cards did much better with collectors. It will be interesting to see if Wednesday’s release will stay consistent with this one. Here are the final numbers.