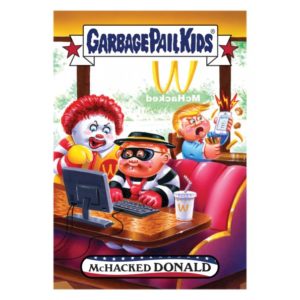 The Hambulger did it! Today Topps revealed the print tun for Garbage Pail Kids Trumpocracy – The First 100 Days cards #120-#122. Who knew all it took was Ronald McDonald and the Hambulger to increase sales? The card based off of the popular McDonalds characters became the 3rd highest selling card in the Trumpocracy set with a total of 331 sold. The other GPK card was slightly higher than usual in sales, while the Wacky Packages card ended up back over the 200 mark. Topps showed when the gags and art is good, they will sell copies. Here is how the sales for Tuesday’s cards ended up.