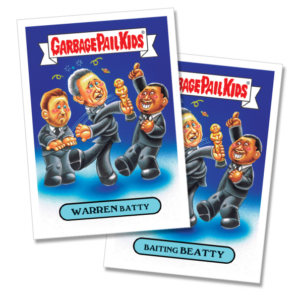 After an much publicized and controversial ending to the Oscars, would that help out sales of the GPK Not-Scars set? Topps has revealed the print run for Garbage Pail Kids 2017 The Not-Scars set. This 18 card set featured eight GPK, (offered in a/b sets), and two Wacky Packages cards. The set was on sale for seven days following the end of the Oscars. Collectors were not willing to give any awards to this years set. The GPK cards all sold right around what the recent political GPK cards have been going for, in the 140-150 range. The Wackys meanwhile saw a sharp decrease compared to other sets, with both cards unable to break the 180 mark in sales. Historically entertainment sets have been tough sellers for Topps, and this set ended up being one of the lowest sales wise. Here are how the final print run numbers came in as revealed on topps.com.