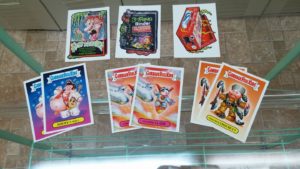 The Philly Non-Sport show is one of the most popular non-sport shows in the country. Taking place two times a year, this year’s spring show is set for April 22 & 23 in Allentown, PA at the Merchants Square Mall. This show’s theme is GPK/Wacky Packages. There are six Topps artists attending the show. They are Neil Camera, Smokin’ Joe McWilliams, Layron DeJarnette, Joe Simko, Jeff Zapata, and Chad Scheres. Each artist has created either a GPK or Wacky card that will be part of a nine card set sold only at the show. This officially licensed Topps set consists of three GPK cards with a/b versions, and three Wacky Packages cards.

Show promoter Roxanne Toser, previewed pictures of the set yesterday via Facebook. The nine card set will be limited to 300 copies, and will cost $25 each. A couple of the sets will be autographed and given out as prizes during the Saturday night dinner with the artists. Proceeds from the sale of the sets will be used to cover some of the artist’s expenses for attending the show. A couple of artists have posted the artwork they did for the set. Here is the known checklist: